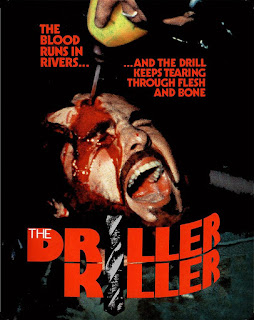 Love him, hate him, used to love him and currently hate him, it all comes off as a bit irrelevant now because Abel Ferrara is a film maker who has made his mark on the industry. Whether it's his version of a science fiction classic like Body Snatchers, his acclaimed grindhouse flick Ms. 45, or even any of his documentaries and/or music videos, he has touched on damn near every genre of film, so it was a treat when Arrow Video decided to give his early grindhouse horror flick The Driller Killer a wonderful new release. While the grindhouse classic mad artist flick rarely gets mentioned as one of his best, which is what happens when you have so many great films to your filmography, this new Blu Ray release is a prime opportunity to look back at this punk rock fueled spin on the social disconnect and appreciate it for the aggressive boundary pushing that it attempts. Like its director, it can be a love it or hate it kind of film, but it is hard to deny that this film doesn’t lay a lot of the groundwork for a ground breaking artist like Ferrara.

Reno (Ferrara) is working on his masterpiece. His girlfriend and their friend Pam try to help support him in their own ways, but the nature of the inner city is not a kind one. They’re way behind on rent and the pressure is on for him to sell his painting sooner rather than later. However, Reno is not well mentally. The pressure of his painting, relationships, and money are getting to him. Day by day, he becomes obsessed with the power drill in the apartment and he’s starting to lose grip on what’s real.

One of the great things about early Ferrara films is that he could take heavy grindhouse concepts and spin them in a way that rose above the normal abrasive and visceral nature of the style. In the case of The Driller Killer, he takes what could have easily been your hum drum splatter film and layers it with enough thoughtful character work and deep writing that it never quite feels like the grindhouse feature it was meant to be. In many ways, the youthful disconnect of a person from the people around them fueled by a punk rock attitude of showing everyone that it doesn’t affect them and the hints of substance abuse is insightful of the time. Not only is our titular lead character, who becomes obsessed with using a drill to relieve the social and financial pressures on him, one of the characters that represents this kind of disconnect, it’s threaded through all of them. His girlfriend, who finds herself looking for a personal connection in a variety of ways, and the roommate who uses drugs and her obsession with the egos and “artists” of the rock band living below them feed into this spiral of characters just looking for a way to reach one another. A variety of the situations that present themselves, including a strange and surrealistic trip to a church to visit a so-called family member to open the film, continually pushes this tone. By the time the moments of horrifically intense bursts of violence start to become a regular thing in the second half of the film, courtesy of some solid special effects, it almost comes as a kind of relief to the audience too – as terrible as that seems. This tone and gritty abrasiveness is why The Driller Killer is so effective in its story telling…shockingly so.

Part of its tone and atmosphere is derived from its ‘rough around the edges’ nature of execution. This, however, can be both a blessing and a curse for the film. Many of the performances can be hit or miss, particularly from the secondary cast members including many of the drill victims and/or bystanders of the events of the film, and the editing feels almost too loose for its own good at times. Fortunately, when it’s needed to count, the acting, special effects, and technical abilities of the cast and crew pull off the emotional execution of the film. Ferrara performs well in the lead and makes for a worthy protagonist/antagonist for the audience in relatable ways. Of course, many of these issues that arise in the film can be ruled to the low budget nature of the film and Ferrara’s own inexperience of the time, but in a way, that adds to the rock n’ roll nature and vibes that further pushes its themes of disconnect and pressure. It also helps that this latest Arrow Video release cleans up a lot of the visual and audio aspects of the film for a version worthy of a purchase for old and new fans.

As a massive bonus, this release also comes packed with a slew of special features to make it worth the money even on a blind buy. The list is added to the review below, but highlights including having two versions of the film, a fun little visual essay about Ferrara’s directorial career, and an interview with Ferrara about this period that features all kinds of strange and often insightful anecdotes for fans. It’s all icing on an already worthy restoration of the film.

For those who haven’t experienced The Driller Killer, this latest Blu Ray is the way to do so. The film is a grindhouse classic, coming off as a sort of 1970s preamble to the horrific character study that films like American Psycho have made a staple of the genre in the modern age with its bursts of shocking violence and a pulsating grit to its tone. The rest of the special features are worthy of the kind of following that this film deserves and add valuable insight and depth to a film that’s already packed with both on its own. Even if you weren’t a fan of this film to begin with, the Arrow Video release makes this a film worth revisiting and appreciating for its ahead of the curve nature.