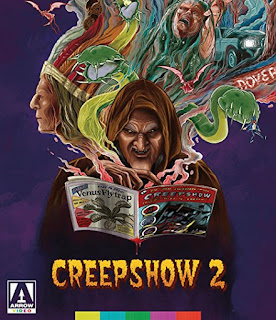 The original Creepshow remains one of the cornerstones to the horror anthology, a format that has seen a revival in recent years that very obviously uses the style and lessons of the George Romero/Stephen King collaboration as a blueprint, but the second film in the series tends to carry a lot of baggage with it as being a massive disappointment. With the recent re-release of Creepshow 2 on Blu Ray in the US via Arrow Video though, I hope that fans of the original give this film another shot. That’s because, while it isn’t as good as the original one and it is flawed overall, it’s not nearly as horrendous as many of the reviews of it would indicate. I think it’s due time that most horror fans and cult cinephiles give it another shot and there is not a better time to do it than with this latest version that sees the film in its best form in a long, long time.

A young boy Billy shows up to get his latest copy of the horror comic Creepshow from the creepy delivery truck man (Savini). This latest issue has three new stories in it. The first is about an elderly couple held hostage by three hoodlums in their small store intent on stealing some Native American jewelry. The second follows four teens as they decide to take a silly late fall dip out to a remote raft on a secluded lake only to be stalked by a monstrous ‘thing’ in the water. The third story revolved around a young wife in a hurry home who accidentally kills a hitch hiker on the side of the road only to be haunted for the entire journey back. If those stories don’t kill Billy, then perhaps the bullies on his ride home will, but he may have a secret ace in the sleeve.

As I say when reviewing all anthology films, there is going to be some high-quality parts, mediocre ones, and terrible ones. There are only a handful of films that have skewed this balance of quality one way or the other. The hope is that the good simply outweigh the bad. In this sense, Creepshow 2 is still a film that succeeds. Instead of having five stories like its predecessor, this film instead opts for three and then wraps it around in another story that bookends the film and serves as interludes between the other portions. The stories that make up the bulk of the film are remarkably fun. All three are based on various Stephen King tales and while the quality even within each segment may vary, they are all entertaining short films that still work. The highlight of the film might be the opening story, “Old Chief Wood’nhead,” that really uses its broad stroke characters to deliver a strong set up and some solid tension to be held. Technically, the horror in this one is perhaps the smallest piece of the whole only going into a bit of slasher territory for its finale, but the great characters make up for what amounts to a bit of slower pacing. The other two are a bit more hit and miss. “The Raft” suffers from generally unlikable and generic characters, although earns some of its misplaced focus by having spectacular effects and a creepy concept. “The Hitch-hiker” feels a bit more like an underdeveloped Tales from the Crypt story (which, outside of being underdeveloped, is a good thing) and the weird humor that permeates the simplistic idea makes it a fun story. All three feature some fun set pieces, great special effects, and dry dark humor and while none of them are perfect, they work for what Creepshow 2 intends.

The big problem that arises in Creepshow 2 is that the story that is meant to bookend the film and interweave between the stories is pretty damn terrible. Ninety percent of the screen time it takes up is done in a shoddy animated style, that looks nothing like the comics it should have used as inspiration to replicate, and the story is weak with nothing for the audience to grab onto. Even ‘The Creep,’ the host that is meant to introduce each story and transition the audience from one piece to the next, feels like an awful Crypt Keeper knock off that can’t get a worthy line of word play filled dialogue out. All of these segments are unfocused and unnecessary with no story worthy of telling. They aren’t fun and it feels grating when compared to the other tales that are being told. It begs the question, wasn’t there a better story out there at all?

So, yes, ultimately Creepshow 2 does stumble a bit to be a more cohesive picture and it fails to have a lot of the flair that made its predecessor such a successful horror anthology film. This latest Arrow Video release does make the purchase worth it for even the most casual fans of the series with a stunning amount of interviews and special features to go with the restoration. The film is fun enough and the three segments it contains are entertaining in a lot of off beat ways that Creepshow 2 is a massively underrated sequel that is not deserving of the spite it receives from horror fans. Let this latest release urge you to take another look at this horror anthology with a fresh perspective, you just might find that it’s not nearly as bad as it was said to be.

Written By Matt Reifschneider
Posted by DarkReif at 12:17 AM