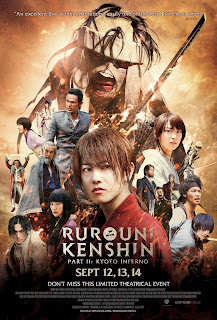 After kicking off the franchise with such a great entry like Rurouni Kenshin – Part I: Origins, there was only one place to go with the series: more epic. The following two sequels, Part II: Kyoto Inferno and Part III: The Legend Ends, are essentially one four-and-a-half-hour sequel split into two parts. They were not going to fuck around when they decided to go epic, I suppose, and this was the manner in which they chose to embrace it. The two films are essentially one film, so for my review I decided it was fitting to review them together.  Both are strong entries into the franchise, although neither quite hits the heights of the original in blending fun, entertainment, heart, and action in such an effective manner. In fact, it’s the epic nature of these films that is both a blessing and a curse. Yes, both films take the series to the next level of complexity, but it lacks a bit of that efficient storytelling that made the first one so good. Both are still highly entertaining blends of classic samurai storytelling with modern scale, so keep that in mind as you dig into Kyoto Inferno and The Legend Ends and enjoy them for the massive scale sequels they are.

Kenshin (Sahto) has finally settled into a new life with his friends at the school. However, his past is not done haunting him. Another assassin named Shishio from the war, one that was burned and left for dead by his own government, is back and has built a small army ready to overthrow the new era. The new officials are afraid of his rising power and it will be up to Kenshin with his friends – and a few new ones – to dig deep into themselves to stop the powerful killsword before he levels entire cities in his wake.

Like the original, Kyoto Inferno and The Legend Ends both attempt at blending classic samurai staples with a modern sense of scope and diverse storytelling. Kenshin, played once again with strong screen dynamics by Sahto, is a worthy protagonist and one that does come off as a hero worth watching. Like many martial arts movies of the past, these sequels intend to take his character, break him down, and rebuild him to battle a much superior antagonist – this time portrayed by a mummy-esque, horrifically burned killsword that was intended to take Kenshin’s place as the ultimate weapon in the war that ended prior to the narrative start of this series. The key for these films is building that kind of “ultimate evil” of the villain for our hero (and his buddies, although even they all seem to have a lessoned role in this film initially in his growth as a character) to rise up against and in that manner they ably do this. To achieve this goal, the two films introduce a slew of new characters – most of which are either evil or semi-evil – and it does dilute the narrative a bit. By the end of Kyoto Inferno, many of the characters that we grew to love in the first film are side lined by adding in new characters and there simply isn’t enough screen time to ably build all of them. Both films do an admirable job at trying, Kyoto Inferno takes the brunt of this by being the film that must introduce all the new villains and the circumstances that break Kenshin down for him to come back from, but it’s a lot to devour in a short period. To the films benefit, most of the characters are built to be unique visually and they sport very diverse personalities to let the stand out. The performances are all spot on to embrace this and it does elevate many of the narrative flaws that could have come from jamming so many characters into what consummates as one film. Also, by the time the finale of The Legend Ends comes about, all the characters seem to fall into place and it leads to one of the greatest showdowns I’ve seen in recent action film history.

Which does bring up the point, despite having to add in a ton of new plot, characters, and arcs to be able to tell this story about the rise of a villain and the retraining of Kenshin to match the challenge, the action is just as good – if not better than the original film. Kyoto Inferno can be a bit lacking in the action, although two great sword fights between Kenshin and the villain’s lackeys highlight the film and the finale is more of a siege piece than the all-out brawls that the first film executed well. However, The Legend Ends features some of the great sword fighting sequences put to film in the last 20 years. The entirety of the finale, where Kenshin and his friends must attack the villain on his giant war ship, is just some of the most phenomenally paced and choreographed fight work I’ve seen in a long time. The speed and sweep spectacle lends itself to a wuxia tone, but the bursts of violence and hard hitting moments lend themselves to those classic samurai flicks of old. It also helps that it’s strength is its diversity. Each of the protagonists at this point has a defined style of fight and action and the film embraces those to give the film impressive pushes in pulls in craftsmanship. If anything, the last 20 minutes of The Legend Ends deserves a perfect score just based on the action alone.

In a way, the more epic tone that goes with Kyoto Inferno and The Legend Ends is a blessing and a curse. The plot tends to be a little thin by introducing so many characters and elongating Kenshin’s fall and rise against his latest adversary, but at the same time all those new characters are delightfully fun and well stylized within the short time onscreen and the plotting does follow the classic martial arts tropes in a well-executed manner. On their own, each film is not all that fulfilling. Kyoto Inferno lacks the spectacle of action as it focuses on laying the groundwork for all the characters and plot and The Legend Ends doesn’t give enough time to many of the side characters to balance out its spectacular finale, but together they make a bombastic sequel worthy of following up the first film. It doesn’t quite hit the same balance as Origins, but it still makes for one hell of an entertaining follow up that gets most of it right. It’s worth the price of buying both just for the finale.

It doesn’t sound like we will be getting another entry into this franchise, but let’s be happy that this series ended like it did. The combination of Kyoto Inferno and The Legend Ends is a great and epic way to cap it off. It comes highly recommended.