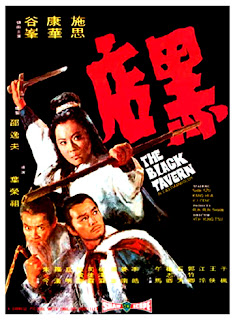 After being blown away by The Lady Hermit, I was quick to throw its semi-sequel The Black Tavern to the top of my list to watch. The film came with some solid recommendations from fellow Shaw Brothers fanatics, but it still seems to be an overlooked classic that doesn’t get nearly the amount of praise that it should. The Black Tavern is an effective and ambitiously trimmed martial arts thriller that makes phenomenal use of its rather limited settings and its list of villainous thieves which culminates in a plethora of iconic wuxia style battles worthy of being included in the fabled Shaw Brothers catalog. It might seem like a simple set up, but The Black Tavern features a number of top notch performances and more than a handful of twists that will have the audience hooked and their mouths agape.

While it was the success of The Lady Hermit that lead me to digging into The Black Tavern, the film is not necessarily a true sequel to the famous Cheng Pei Pei lead wuxia. In many ways, the film is more of a spin off or a side story set in the same universe where one major character crosses over between the two. In this case, it’s Lady Hermit’s protégé played with striking screen charisma by Shih Szu that arrives in the film. Even then, if you haven’t seen the original Lady Hermit, you will not necessarily be out of the loop in this one as the film handles her arrival – about midway through the picture and only to really take stage in the final act – in a way that doesn’t require previous knowledge of who she is, but it still makes for a great little thread that connects two fantastic movies that sit on their own in phenomenal ways. So feel free to watch this even if you haven’t seen its predecessor. With or without her, this film is striking.

The Black Tavern works as a standalone story as a kind of reverse murder mystery. The film opens up with a traveling beggar talking about a retiring corrupt official who is traveling with a hidden and significant amount of treasure on his person to a small restaurant filled with conniving thieves ready to act on this information. It’s soon revealed that this official will be heading in a direction where there is only one inn he could possibly stay at for the night and it’s a game of which villain will be the one to ultimately pull off the heist. This is what sets up a reverse murder mystery. Instead of an inn full of victims and heroes desperate to unveil the evil doer, The Black Tavern is a film that’s filled with various kinds and shades of villains where the audience is left to wonder which one is the hero in disguise. It’s a variation on the concept that works in a ton of impressive ways. Instead of a an audience looking for the darkness in each individual that arrives at the inn to spot the killer, they are looking for the good aspects to their personalities to see which one will step up as the hero to stop the shenanigans that are going down. This makes these villains feel like deeper and more complicated characters that adds so much thoughtful character building to all of the main players. The audience is forced to look for the best in all of them instead of writing them off as one tone baddies ready to be sliced and diced. There are, of course, certain characters that arrive that are obviously in the bad guy department, but even then the viewer is left wondering just how bad they are. Partnered with the director’s ability to craft some great detailed tension between various parties and a handful of great performances, The Black Tavern is a film that truly embraces its simply idea in ways that makes the entire film a much more emotionally impacting and resonating. By the time the final twists start to make their rounds, the film is going to have already hooked its audience and it’s a perfect way to play out its martial arts mayhem.

With the foundations of a tense thriller and guessing game about who the hero is and when they will “show up,” The Black Tavern is allowed to take its simple setting (about 85% of the film is set within and just outside of the titular inn) and characters to give them plenty of action sequences. The core group of protagonists, the main group of villains who drive the story, are given plenty of other groups of gimmicky villains to clash against and the fights are remarkably diverse and oddly spectacular considering the limited sets and style. Clashing swords, gimmicky characters, and larger than life personalities all clash in classic Shaw Brothers wuxia fashion and the film uses its darker and more serious tones to influence these action sequences. The Black Tavern features not one, not two, but three insanely vicious decapitations that I was not expecting. Again, when your main stay of characters are all bad guys, anything goes here and it makes the stakes feel even stronger. Even when the hero (or is it heroes?) is revealed, the interplay between the developed characters bleeds right into one of the best martial arts finales that the Shaw Brothers studio produced. That says a lot. Once again, the execution here just improves it all with brilliant performances – hats off to Ku Feng who just owns the film as the whip toting leader of our main group of baddies – and top notch choreography.

Truly, like its predecessor, The Black Tavern is one of those iconic Shaw Brothers films that seems to fall a bit under the radar for no particular reason. It’s a tight, effective thriller brimming with stunning martial arts fight work, fascinating characters, and a trimmed but sublime plotting that utilizes these elements in an almost perfect harmony. I kind of wish that Shaw Brothers had really jumped at the opportunity to further expand this Lady Hermit franchise. As is, this spin off remains a potent wuxia flick worthy of another look from fans and newbies alike.