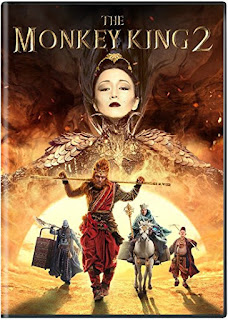 Having recently watched The Monkey King when it finally arrived on Netflix Streaming in the US, the announcement that Well Go USA was going to be releasing the second film, the aptly titled The Monkey King 2, in the US on VOD, DVD and Blu Ray came as something of a shock. While the first and second film in this fantasy action franchise did some serious cash in the Chinese box office in 2014 and 2016 respectively, the first film was wholly centered on very non-western concepts with story arcs and beyond that was a massive CGI fueled, family friendly train wreck. Was the second film going to improve on the quality and, if so, would a western audience in the US really be willing to dive into the culture of this tale? The second part of the question remains to be seen (The Monkey King 2 is currently available on VOD, but doesn’t hit physical media until early January), but the quality of the film and the approach would certainly indicate movement in the right direction. Does it match the quirky and artistic merits of many of the other cinematic spins on the Journey to the West story line? Hell no, but The Monkey King 2 does fix many of the issues that plagued the first entry and does provide a decently fun and entertaining fantasy flick…even if there are plenty of issues to address still.

500 years. It has been 500 years since Buddha has punished Wukong the Monkey King (Aaron Kwok) to reside in Five Finger Mountain for his arrogance in creative havoc in heaven. When a traveling monk (William Feng) sent to the west to retrieve some scrolls, happens upon him and unleashes him, Wukong is tasked with protecting his new master on his journey. Their journey, however, will not be easy and Wukong has yet to really fix his arrogant and limited viewpoint even in 500 years. When the White Bone Demon (Gong Li) arrives to use the monk to grant her an eternity as a demon, Wukong will have to dig deep and find a new strength and courage to save his new master.

The first thing to understand when going into The Monkey King 2 is that the film is a substantial improvement on almost every level when compared to the first one. This film, while lacking a bit of the unrelenting energetic charm of Donnie Yen as the lead to be replaced by a slightly darker and more intense performance from Aaron Kwok, is still bigger than life and stacked fantasy entertainment. The first thing that it improves on is that it simplifies the plot and gives it more focus. There are still plenty of strange tangents involved getting into the story, including an entire subplot that uses a cursed king that is supposed to involve a red herring concerning the villains that feels a bit undercooked, but the film moves at a rapid enough pace that it works much better this time around. It’s still silly and contains a family friendly vibe at times (particularly when concerned with the two new demons that are meant to serve the monk on his journey which act as comedic relief more or less,) but it drops down a much more defined plot and smaller set of characters to make sure that it doesn’t meander about like the first film. It’s easy to follow and focuses on more traditional storytelling approaches. It works better.

Secondly, the film grounds itself better than its predecessor. Instead of taking place completely in the realm of gods, demons, and deities, The Monkey King 2 plants itself in the “human world” and it gives the film a bit of grounding and consequence to the events transpiring. There are life or death decisions to be made and it makes the character growth of the titular character and those around him feel more impactful and effective. Being a more family friendly fantasy film, it does tend to water down some of those in more magical and occasionally cartoonish ways, but the use of humans and their lives in interaction with these godlike powerful entities makes a huge difference in how it all works.

Despite both massive improvements in a grounded approach and more cohesive plot, it’s hard to call The Monkey King 2 a great film. It still falters a bit on focusing a bit too much on random spectacle to make things more epic and most of the action sequences fail to utilize the Sammo Hung action work to maximum benefit. While the CGI is much improved over the first one and perhaps one of the better applications of it that modern Chinese cinema has used recently, it can also be hit or miss. A river dragon sequence looks fantastic, but a giant killer pig sequence looks awkward. This happens time and time again and it can pull the audience out of the film. The performances are also hit or miss. As mentioned, Aaron Kwok takes the lead role into slightly darker territory, but lacks the energetic effect that Donnie Yen brought to the role. Many of the secondary characters tend to be broad stroke gimmicks too. Outside of a well-developed villain, who steals a lot of the screen time with her slightly seductive and super cold performance, her animalistic henchmen and the two other demons that support our hero and his master are there just for visuals and added action. The core writing and approach is better than the first film, but much of the detailing of the film still tends to fall short of solid.

All in all, it is appreciated that this massive foreign franchise is moving in the right direction. The Monkey King 2 still a decently flawed film and lacks the artistry needed to carry it to the next level, but it’s hard not to enjoy it on some level as a large scope action adventure flick. It’s a fun, massively entertaining fantasy film that uses its famous source material to decent effect as a popcorn flick. Even if you haven’t seen the first Monkey King, this one might be worth checking out if you enjoy the Journey to the West story or enjoy epic fantasy blockbusters.