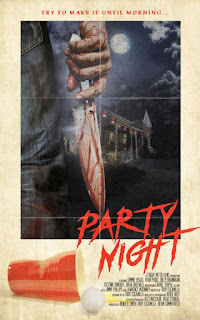 There is a moment in Party Night where the small group of teen friends find a VHS player in the secluded house in the woods in which they are staying. Next to it, a stack of old school slashers like Halloween. One of the teens in the group gets excited, talking about growing up with the films and his love for them. Proclaiming at one point that their post-Prom little party needs to add a viewing of The Mutilator to the agenda. This moment is a key point at understanding the approach and heart that Party Night brings to the table. The film is flawed, obviously restrained by its limited budget and eager learning talents in front and behind the camera, but there is a youthful excitement in its unabashed throwback 80s style that is paralleled by this teenage character and his oddly specific reference to a cult classic like The Mutilator. This film is not perfect, but it has a meta style quality in this moment that threads through most of the film that may strike a chord with slasher fans that are looking for a film that wants to recreate the style and approach to those ultra-low budget slashers of decades gone…warts and all.

A trio of high school couples just want to spend their post-Prom in each other’s company and one of them just so happens to have an uncle with a remote cabin who is out of town for the weekend. However, the warnings of a slew of missing young women in the area is only a minor thought in their dreams of a place where they can spend some quality time with one another as their days of being in high school come to an end. They should have taken those flyers and warnings a bit more seriously…because they are not alone up at the house and a faceless menace is out to make sure that their lives end by the end of the night.

Party Night is simplistic in its focus. This is a film that wants to recreate the 80s tone and approach to a modern slasher and it isn’t going to let anything stand in its way. The film doesn’t even seem to really want to flesh out its characters, spending almost no time with the group of teens or their lives outside of the film before sending them on their ways to meet their masked assailant. This kind of simplicity can be appreciated on one hand; the film is brisk in its pacing and maneuvers through the slasher formula at a pacing that’s almost unheard of currently. As I mentioned in the introduction, there is an energy and heart here in that recreation that saves a lot of the film from falling into its flaws to derail the film and that must be addressed. Even when the film is less concerned with its characters, focusing to build their slasher fodder character arcs as the film progresses rather than loading the front with exposition, it moves quickly enough and in a charming enough manner that it’s inoffensive more than anything else. It does leave a lot to be desired from its plot. There needs to be at least one character that the audience cares about to drive the action versus always reacting to what’s happening and the Black Christmas approach to leaving the villain of the film perpetually vague in motive and characteristics doesn’t always work in the films favor, but it's hard not to just run with it when it starts using its momentum in its favor.

Here is where Party Night showcases its biggest flaws in drawing out a narrative, but at the same time due to its 80s-slasher recreation focus doesn’t necessarily betray its intent. This is not a film meant to stand out as fresh and in this manner, it almost seems that it could have run with its meta content a bit further. There are stark similarities in its basic plot foundations to the previously mentioned The Mutilator and more of those parallels would have come as a wonderful surprise to slasher fans. It doesn’t have to go full Scream or Cabin in the Woods in this manner, not that they have the budget for either, but making more homages and more apparent parallels would have made the film even more fun than it already is as a throwback piece of cinema for slasher fans. Party Night already does this to some extent, but it seems to stop just short of hitting the concept out of the park.

The rest of the film can be hit or miss in execution. In similar ways to its concept, approach, and writing style, Party Night has a ton of heart and energy in excess in its execution that carries over many of the problematic areas. The performances range from solid to meandering, although perhaps with some fleshing out those could have been addressed in full, and the old school approach to direction and special effects indicate the same kind of fun intent. In particular, the special effects are solid pieces of gore that will have those slasher fans hootin’ and hollarin’.  The editing can be tightened up a bit throughout, although nothing too much was distracting away from the whole, and considering the low budget and DIY attitude of the film a lot of it should be admired in some regard. Like the rest of the film, it’s all about the tone and feel and the execution gets that across despite its flaws.

All in all, Party Night is the kind of film that that can be respected for its intent and energetic approach. It never takes itself too seriously, it ably pushes its throwback intent, and it executes strongly enough on the slasher pieces (the practical effects, man) that with the right mindset slasher fans will have a blast with this indie retro horror flick. It’s not perfect and I desperately wanted the film to run with its meta moments and homages even further, but I had a lot of fun with Party Night and ultimately that’s what counts.

Written By Matt Reifschneider
Posted by DarkReif at 2:43 PM