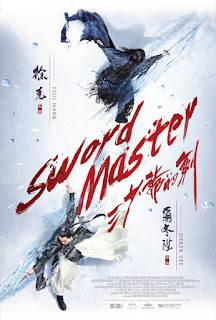 There are a lot of emotions that I had before I even started to watch Sword Master that I had to take into consideration to give this film context. Sword Master is a remake of the overlooked and underappreciated Shaw Brothers wuxia classic Death Duel, a film that easily makes my list for best films from the iconic studio, and it also marks the first collaboration between two powerhouses of Chinese cinema: director Derek Yee and producer Tsui Hark. Even before this film was released, the combination of these facts made this film an emotional roller coaster for me. Derek Yee knows the original material, he was the lead actor in Death Duel, but Tsui Hark has been notorious for over producing films into a sort of CGI nightmare that has undermined plenty of fun films (including the Detective Dee films and the horrendous misfire Flying Swords of Dragon Gate). So even sifting through the context of expectations for Sword Master was a complicated matter, but I kept my hopes up thinking it could end up being the next great wuxia film.

Well, Sword Master is not necessarily the next great wuxia film. The film is a lot of fun, balancing a throwback style that pulls a lot of lessons from Derek Yee’s time with the Shaw Brothers studio as a wuxia star back in the day, but it also features a lot of the film being undercut as an overproduced flick with inferior CGI effects. In a way, it carries a lot of the dramatic heft of a Derek Yee film, but it can’t overcome the strange need to be too much visual spectacle to drive home many of its themes and characters that are present in the film. It’s still massively entertaining and there are these great sequences that indicate the modern wuxia classic it might have been with a bit of trimming and a focus on grounding some of the visuals a bit more, but those who might have been skeptical from the get go about its extensive CGI and cheesy elements will not be swayed away from their disappointment.

Ah Chi (Kenny Lin) has been wandering and working to live a simple life. Secretly, he’s the fabled Third Master from Sword Mansion who has fled his fame in search of peace away from the violence that it had brought on his life. That doesn’t stop his past from finding him though as another wandering swordsman Yan (Peter Ho) intends to duel with Third Master to the death to test his own skill, but an impending war between various martial houses poses a threat to both.

There are two sides to how to approach Sword Master as a viewer. The first side is the emotional drama that permeates most of the writing and characters builds. There are a lot of underlying themes and tones that sift underneath the spectacle on the surface about fame, violence, one’s place in world, and how to use talents. In this case, the film, at least tonally, is similar to the original Death Duel. It changes a handful of the of approaches to the film, focusing a bit more on Third Master’s rival whom is played with an over the top glory by Peter Ho, and approaching the film in a slightly modern narrative structure. It doesn’t always work, the visual style takes the focus in far too many sequences and the performances are over the top even in many of the more emotionally subtle scenes, but it touches on a lot of great themes and characters to run with. It might not resonate as well as it might have, particularly with some of the cheesy flashbacks that needed to emotionally punch the viewer, but most of it works at least. The questions it poses are universal ones and Derek Yee keeps those threaded nicely throughout the entire film.

The second way to approach Sword Master is as a high-flying wuxia fantasy film. In many ways, more so than original film approached the material, Sword Master almost plays itself out like a fairy tale. The moral foundations of its characters, the colorful approach to the visuals, and the over the top characters that litter this universe that it creates, all give the film a fantasy like morality tale approach. While the inferior CGI backdrops and the focus on the style of the fight work can be irritating (even for me, it does seem a bit much and overproduced as is the Tsui Hark way), I must admit that it gives the film that fairy tale flavoring that ultimately works to its benefit. There is a need for this film to ground itself occasionally to make its points poignant and some of the action lacks that grounding to give that violence the impact needed for the story, but in the lens of being a fairy tale it does work and it was an angle that I did not expect going into the film.

Between these two approaches, Derek Yee and Tsui Hark do create an entertaining film in the end. While the emotional portion of its narrative doesn’t quite hit home with impact and the visuals can be a bit too much CGI to work in balance with the above-mentioned narrative, Sword Master is a film that entertained throughout. The action sequences are ably fun and gimmicky, culminating in a great sequence where Third Master must defeat an army of poisoned assassins without ever fully drawing his sword from its scabbard or killing anyone, and Derek Yee pulls plenty of style points and approaches from the Chor Yuen books of Shaw Brothers wuxia film making. The villains wear silly skull masks, Third Master’s rival is obsessed with his own death to the point of carrying a five-foot-tall tombstone with his name carved on it strapped to his back, and the romantic triangle is gloriously over the top. Even many of the film’s twists work to keep things entertaining, even if they lack sense ultimately. This is old school wuxia approaches with a modern style and that is key when a viewer goes into watching this film.

While I can’t say that this film touches on the original Death Duel and it certainly doesn’t come close to many of the more artistic wuxia films released lately, Sword Master entertains and contains enough throwback silliness that it’s Shaw Brothers bones and gimmicks are played on its sleeve in plain sight. Perhaps this is the new direction that wuxia is taking, considering the classic Shaw tones that punched their way through Crouching Tiger, Hidden Dragon 2, but Sword Master does blend the experience of Derek Yee as a storyteller and the visual fantasy pieces of Tsui Hark in a way that doesn’t betray either iconic filmmaker. It didn’t quite live up to the epic expectations I may have had going into the film, but the more I sit with the film and watch it (I’m on my third watch as I write this) the more it works for me as a modern wuxia fairy tale that creates a world worthy of visiting once for fans. Keep those expectations in check and look to be entertained first and foremost with Sword Master and this film will work.

If anything, now that many of the stylistic wrinkles are ironed out, the combination of Derek Yee and Tsui Hark could make for a powerhouse duo if they keep this style. Perhaps they will come back to grow this universe some more. I’ll certainly be happy to come back.