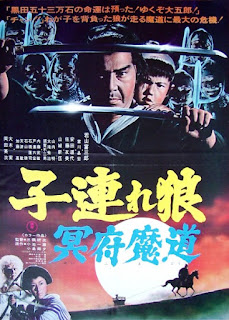 Finally, the downward spiral of the Lone Wolf and Cub franchise ends. After a slightly off beat western influenced entry (Baby Cart to Hades) and an entry that fully embraced its exploitative elements (Baby Cart in Peril), the fifth entry to this critically acclaimed series is back to running with all of the great things about Lone Wolf and Cub. You can say that a lot of this happens because of the return of Kenji Misumi to the director’s chair, which is a huge part of it, but Lone Wolf and Cub: Baby Cart in the Land of Demons is just a better, more cohesive film all around. The artistic merits have come back into the fold, the performances are top notch, and the writing might be the most fluid that the series has seen thus far. While the first two entries certainly receive a bulk of the praise for this franchise, Baby Cart in the Land of Demons is just as good – and I’ll go there – if not slightly better than both of the first films. It’s a remarkable piece of chanbara cinema that takes the best artistic aspects and gives it that Lone Wolf spin in all the best ways.

Lone Wolf (Tomisaburo Wakayama) and his son (Akihrio Tomikawa) are just wandering about their way, as all wandering assassins must do, when a man with a cloth over his face challenges them. He’s quickly dispatched, as all wandering assassins can do, and unveils that he is only the first of five masked assailants that will test their skills, each with a little piece of information and money to convince them to take a very unique assassination quest.

If there is any obvious evidence to the power of Kenji Misumi as a director, hired gun or not, it’s Baby Cart in the Land of Demons. The series was already on a slippery slope of quality before he took a break from directing these films, but it hits a low when he’s not involved in the previous entry. His return for this fifth entry is a welcome addition that rightfully gets this hack n’ slash chanbara film back on track. Kenji Misumi was always able to pull out the artistry in almost any kind of exploitative film and here he works his magic once again. Visually speaking, Land of Demons is not the most entertaining – although an underwater assassination comes off as perhaps the gimmickiest part of the entire film – but it’s one of the more effective of the series even when it comes to action as it runs with a variety of diverse set pieces. Even when the film seemingly side steps into a tangent set piece, where the titular cub Daigoro is flogged in front of a crowd for refusing to give up a young woman who is caught stealing, the film holds a remarkable dramatic tone and it lifts it above its rather straight forward plotting. This happens again and again as the film digs into the narrative, style, and visuals to give it a depth that the last two entries had lacked almost completely.

It does help that the story itself is one of the more cohesive and complete stories of the series. While the film starts off a bit more on the exploitation side with a rapid fire series of duels where five masked messengers attempt to challenge Itto, it quickly plays these exploitation pieces as part of a much deeper whole. While this latest assassination attempt plays out in a similar fashion as previous entries, there is a deeper political and religious tone that bubbles under the surface as our two anti-heroes uncover a larger conspiracy with even more morally gray areas for the series to explore. While the film still utilizes its moments of extreme violence and bursts of high octane action to entertain, the story is interesting enough to keep the film pace moving without necessarily adding all of those pieces in there. The narrative break that features Daigoro and the thief is really the only thing that pulls away from the main plot and even then the use of it to explore themes and characters makes it a welcome addition even if I found myself wanting the side characters to come back round again to play a larger role.

For fans of this series, Baby Cart in the Land of Demons represents a welcome return to form. It’s not only an effectively entertaining hack n’ slash kind of sword clashing film filled with violence and memorable action set pieces, but it’s also a well built and thoughtful story that expands and pushes the character and the series themes with substantial force. It’s somewhat of a shame that this one gets lost in the shuffle as it falls between the two weakest entries in the series, but Baby Cart in the Land of Demons deserves to be mentioned in conjuction with the strength of artistic genre film making that the first two films receive. It’s, plain and simple, that great.

Written By Matt Reifschneider
Posted by DarkReif at 4:47 PM