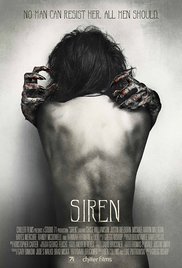 The segment known as Amateur Night in the original V/H/S film was easily one of the highlights of that horror anthology and when it was announced that it was being developed into a full film, I was all for it. Adding to that hype was getting Gregg Bishop to direct it, who was easily one of the names to watch after the hilariously fun Dance of the Dead back in 2008. The only thing that killed some of my excitement was that it was being made by Chiller and really, I did have some worry that it would be made for TV quality. While the film, going under the name SiREN (and yes, it's spelled that way officially), does have some issues with its budget, the results are still surprisingly fun and refreshing as it continually world builds and adds in a level of thoughtful writing and execution to the gimmicks of the short film it was based on.

Jonah (Williamson) is getting married. While he doesn’t want to have a bachelor party, his brother (Milligan) and his two friends (Mercure, McDowell) insist. So off they go to a smaller city of strip clubs and other similar establishments. However, the party goes a little strange when they are invited to a special club that’s a little off the beaten path and Jonah ends up finding a young woman (Fierman) locked in a room. Being the good man that he is, he decides to free her not knowing that she is not what she seems.

Instead of rehashing the segment from V/H/S, Bishop and team opt to go with the concept (guys out to party stumble upon this "girl" and shit goes awry) and fix the problems and wrap a fascinating world around it. The characters in the film are much more likable than the ones in the segment which uses some cliché bachelor party schtick to get us to care about them, thank God, and the place where they stumble into our titular monster woman is not your normal party. In fact, it's the setting of this otherworldly bar and club, that might be the ace in the sleeve for SiREN. There is a whole world that can easily be franchised around the idea of this place where this demonic monster is being kept for other people's enjoyment and it makes for some quirky and strong visuals to place the film in. Bishop does his thing here as a director, proving that Dance of the Dead wasn't just a fluke, and ably pulls some great visuals and tense moments out of the film too. In particular, a diner slaughter is shot in a particularly slick fashion that had me grinning from ear to ear. Partner his abilities to pull out great moments with some decent performances, again Hannah Fierman as the monstrous Lily steals the movie and doing it mostly in the nude and/or body suit which is always challenging, but I was shocked at the quality in general of the execution. SiREN goes for broke in actually developing a story and executing it which came as a very pleasant surprise.

If there is anything that prevents SiREN from scoring higher, it's the budgetary constraints. The CGI looks cheap at times, despite some of the better practical effects that pop up as a welcome addition to the wings and tail of Lily, and the film lacks some of the sleeker production values that would have kicked it to the next level. There are a handful of scenes where Bishop tries to avoid showing too much, using shadows on curtains or similar tricks, but for the impact of certain scenes we have to see it and that’s when the CGI can be a burden on the film. Along with that, there are a few narrative bumps that the film must overcome to get where it needs to be, some stemming from the lacking budget. The ending of the film feels a tad tacked on and up front with its final moments and there are a few pieces that seem to fall by the wayside that seem like they needed to be addressed, including one character that is plucked from a vehicle never to be mentioned again outside of a random side note.

In the end though, SiREN may end up being one of the bigger surprises out of 2016 in horror and succeeds in developing an already strong short film into a robust and thoughtful extension of the ideas that works. It has some great moments and it builds a solid universe for the characters and monsters to inhabit which is worthy of some solid praise there. It's not a film for everyone and surely horror fans should be able to look past the budgetary issues to find the fun and killer moments that arise despite its flaws.  SiREN gets the Blood Brothers stamp of approval for a great underground little flick.

Written By Matt Reifschneider
Posted by DarkReif at 2:44 PM