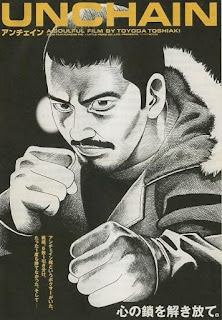 Documentaries on boxing, and even fictional accounts of the sport told on film are something I've always been intrigued by, so it comes with no surprise, when Third Window Films announced they would be including Unchain in their box set for Toyoda, I became quickly excited. Going into Unchain, other than knowing the sport on which its real life characters were shaped by, I knew nothing upon viewing, which is nice.

There isn't a ton to the story to be honest, though it focuses on multiple people. Unchain Kaji, is a young, blistering spirit with the heart of a boxer. He isn't very great, albeit he is greatly determined. After being beaten on numerous occasion (every time, aside from a couple of draws I believe), Unchain never won a match, and to worsen things, his eyes suffered from nerve paralysis cause by the sport he loved. 3 other boxers, all linked to Kaji, have their stories told, and how they connect with him and they all went through together, how boxing (and variations: kick boxing, shoot boxing) made them who they were.

For at least half of the film, I must admit, I didn't care for these characters too much, and maybe not very much walking away after it was all said and done, but I will not deny how fascinating and intriguing these beings were. They are all sort of losers in their own ways, but the testosterone driven lives led them all down very different paths. Kaji seems like a sweet guy, but his fists caused him more trouble and heartache than most would ever want to go through, yet he continues to be passionate for his art. I may not (definitely not) agree with his life choices, but his determination, is very admirable and worth applauding.

There admittedly isn't a ton to say on this one, but those interested in boxing will find something to hold on to. It is very engaging and you are getting to see these bizarre people being captured in a close and very real manner. Toyoda captured the essence of these boxers and their lives, and he nails it quite well. There isn't really much of an arc for any of them, save for Kaji, and he is sort of the same guy at the end that he was at the beginning, which may be the point, but I digress.

I do like some of the stylized shots and the way some of the flash editing and sound designs heighten the imagery and narration being thrown towards you at breakneck speed. It's very stylish, but seems to reflect the inner (and outer) nature of these loud, and proud fighters. The slow-motion present in Pornostar, which technically was shot after this, is scattered about here and used to similar effect, and works every time. Entire boxing matches are presented here, in a plethora of angles, from ringside wide, and most effectively a camera (handheld) which I am assuming Toyoda was holding from right beside the ring. It's low, and tracks the boxers effectively, providing quite a bit of depth to the psychological state they are in, and unlike most boxing films, most of these matches don't end very triumphantly.

In the end, I quite enjoyed Unchain and it's real, no b.s approach. It's simply about some boxers and their lives, in which intertwine together quite well. It's peppered with just the right amount of style, and spirit. I wasn't standing up and cheering, but I vicariously watched like a hawk from the ringside. Odd characters and plenty of boxing, Unchain may lack the oomph of other works in the genre, but it most certainly holds its own in the ring.