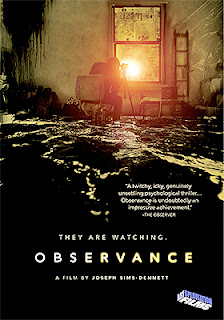 Too often genre films like horror are overlooked as lower forms of cinematic entertainment, but there are a handful of companies that are digging up the best of independent horror to showcase the depth and range of the genre. Artsploitation Films does they best to find the unique and impressive films that lie under the surface of what gets released and they do occasionally strike gold. Their latest acquisition for release in the US is the Australian arthouse horror flick Observance and it’s a hum-dinger. The film is full of unnerving atmosphere, licked with an artful touch of vagueness and subtlety that’s too often ignored in the genre. Not only is it a thoughtfully unsettling film, but it’s damn good at it too as it pulls comparisons to Hitchcock and the classic thriller without deterring from its modern touches of surrealism.

A private investigator (Farris) is looking for some money quick. His personal life is dissolving at a rapid pace and his bills are through the roof. So he takes an easy job for quick cash. Spy on a woman (King) for a few days and report back via phone to a mysterious handler. It seems easy enough. However, things are not what they seem and as the days pass in his papered shack his reality starts to crumble as he begins to uncover a much larger and sinister plan.

Observance is not the kind of film for everyone. It’s one of those artistic films that, in a lot of ways, refuses to fully show its hand in the narrative its telling. It has a decidedly old school approach to its core script with how the story unfolds and if the viewer is not being observant, then a lot of the story and/or payoff in the end is going to feel hollow and unjustified. This is because Observance never, ever sits there and gives you exposition like so many modern horror films do. It’s not going to map out character back stories and the mystery so that it is easier to solve. It makes the audience work for their cinematic treat and that kind of approach earns a lot of respect in my book, particularly when it’s as executed as well as this one is. Just know that going in, this is not a film to be watched haphazardly or while doing something else. It’s attention to details and the meticulous way that it unfolds the narrative requires a smart audience member to put it all together.

This is where my comparison to Hitchcock seem relevant as the film likes to show more than tell with its thriller elements and the viewer is placed almost directly into the shoes of the main protagonist and spy. Director and writer Jospeh Sims-Dennett does this in a variety of ways, but the best of his tactics is how he gives Observance something of a surrealistic tone as the film progresses. It starts off as a basic thriller, we only see events as our main protagonist sees them and it’s fairly cut and dry with a few artistic touches to be embraced (including a scene where he cuts his thumb moving into his apartment). By the end though, Observance has almost Cronenbergian like pieces of personality and emotional decay for the character. Visions when he sleeps of an ocean beach that gets more sinister and symbolic as the details of the story are revealed and there are some grotesque pieces as his own health deteriorates rapidly. All of it means something though which is key for the symbolism to work and it’s just up to the viewer to put it all together.

By the end of Observance, I was gutted. The film executed its simplistic concept with such an ambitious fervor that it was almost impossible not to be swept away in its suspenseful and unnerving atmosphere. When people continually claim that horror is a substandard genre not worthy of awards or merits for artistic cinema, you go ahead and pull out Observance and let them dig in. This is the kind of elevated arthouse cinema that reclaims horror as its own and impactful form of art. Observance comes with only the highest of recommendations.