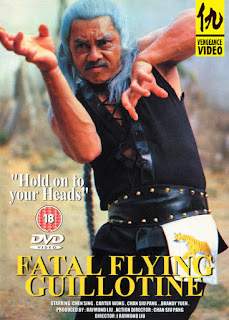 Of all the Flying Guillotine films from this period, Fatal Flying Guillotine is perhaps the weakest. It is a film that is wholly enjoyable and entertaining in many ways, but its plot and narrative feel unfinished and rushed. Part of this is that the film attempts some weak conspiracy elements that don't meld with the main protagonist's plight against the villain and his dual flying guillotines. It takes away time (from its already short run time) to build better characters and more effective emotional beats for them. Carter Wong’s motive for trying to kill the villain is forgotten five minutes after it happens despite it obviously being the big emotional sequence in the entire film. What Fatal Flying Guillotine does accomplish is that it litters the film with over the top fights and bundles of decapitations. The fighting is fun, powered by the intense stare of Carter Wong and the wonderfully silly wig of the villain and his saw blade weapons that miraculously fly around like birds defying all known physics, and the film intends to entertain more than anything else. For martial arts and kung fu nerds, Fatal Flying Guillotine is effectively entertaining, but it's not much more than that. 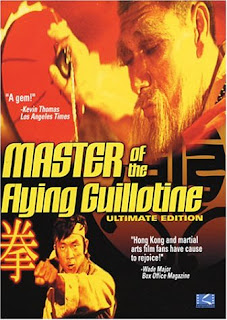 While Master of the Flying Guillotine, also known as One Armed Boxer vs. The Flying Guillotine, does have its issues, it’s hard to ignore how entertaining the film is. It’s certainly a step up from the film previously mentioned above, but it also lacks a lot of the depth needed to sell the concept – especially when compared to deeper characters and conspiracies that the two Shaw Brothers Flying Guillotine films provide.  It drags quite a bit in the beginning of the second act (that's somewhat balanced due to the extensive fight sequences of various combatants even if most of them are essentially pointless to the film itself outside of showing audiences some crazy kung fu), but the opening scene and the finale make this one worth the time for martial arts fans. The master of the flying guillotine might be one of my favorite villains in a kung fu film even if he has almost no character arc outside of being bat-shit insane and willing to decapitate anyone in his quest for revenge against the one-armed boxer. His presence, counter acted by the almost too heroic and goody-two-shoes for his own good role of the hero played by Jimmy Wang Yu, make for a dynamic third act though that uses plenty of gimmicks (and fire) to make things wholly enjoyable and deliriously entertaining. It’s hardly perfect, but it’s easy to see why this film has such an extensive cult following.