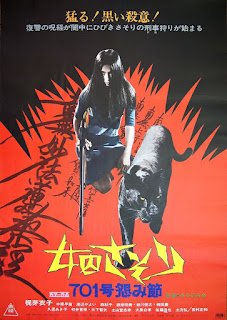 It happens to every franchise. Eventually, they will have to have a significant drop off in quality. There is only so long an inspired artistry, no matter what genre or era, can last as time continues. With the third entry into the Female Prisoner Scorpion series Beast Stable, director Shunya Ito was done with what he wanted to say and moved on from the franchise. However, lead actress Meiko Kaji would stay on for one final film before her departure and for this fourth film in the series, #701’s Grudge Song, she brings on an old time friend to fill Ito’s shoes: Yasuharu Hasebe. Granted, this swan song for the Meiko Kaji era of the character is definitely a huge step down from the previous three – that drop off of quality that I mentioned – due to substandard script, a change of directorial focus, and a bit of a scattered narrative, but Grudge Song still remains a film that works on an entertaining level at least and has an ace up its sleeve when it comes to having the last word.

Scorpion (Meiko Kaji) remains on the run after blowing her cover at the end of the last film and a fresh and determined detective is primed to bring her in and watch her hang for her crimes. While on the run, Scorpion meets a scarred and anti-establishment focused young man Kudo (Masakazu Tamura) who helps her out and together they form a bond that has Scorpion letting down her guard. Will this new connection be the end of the mythical Scorpion?

Immediately it’s evident that Grudge Song is not directed by Ito. Fans of the series or even those that are working through this robust box set from Arrow Video are going to notice the change of style instantly as the movie starts. Unfortunately, the stylistic change makes this film feel flat and much more generic than its predecessors. The majority of the film is played in a much more straightforward manner akin to the likes of the cops and criminals films that were also popular at the Japanese cinema at the time and it heavily pulls away from the surrealistic beats and symbolic tendencies that Ito slathered his Scorpion films with. The style shows up a bit in the color schemes around the interrogation room sequences and in the final fifteen minutes of the film (more on that in a second), but it’s seemingly an afterthought versus a driving stylistic force that it was previously.

In this same manner, the writing of the film seems to pull away from many of the themes and narrative choices that were so impressive in the previous films. Much of the anti-establishment/patriarchy angles are removed by having female guards in the final act in the prison sequence and this film features perhaps the only male character with any redeemable qualities in Scorpion’s new love interest Kudo. The concept that they are cut from the same cloth from corruption works, but it undermines the focus that the series had going into this entry. As the two leads go on the run, the film tends to play things light and fast and it lacks a lot of impact and many scenes don’t seem to fit the overall narrative. A robbery sequence that follows a hostage one both seem shoveled in for the sake of giving our two outlaws something to do in the second act versus something that drives home the plot and character arcs. By the time the film returns to its women in prison roots in the final act, it’s lost a lot of momentum and energy and seems to be going through the motions of being a generic action flick rather than the artistic lift that the franchise was known for.

That is, until the final fifteen minutes of the film. Going into this point, this film was in the running for a two rating on the site. It had some solid performances from Kaji and company and some fun moments, but not much more than that. It didn’t feel like a Female Prisoner Scorpion film and it certainly was taking the film in a new direction that felt too different and off kilter. Then the final fifteen minutes happen and the film takes a jack-knife turn right back into the tone and style of the series. Now I’m going to get a little spoilery at this point in my review, so if you don’t want that then feel free to just close out the page now and know that the final moments of the film redeem the previous moments somewhat. Don't worry, I’m going to explain what I mean. For the rest of you, hear me out. If the final moments of the film are robust in visual surrealism and symbolic gestures as Scorpion breaks free from prison once again and goes to slaughter the two men that betrayed her during the events of the film then we have to ask why didn’t Hasebe use it previously if he knew how to replicate Ito’s style? It’s in my opinion that it’s very much intentional that the film wasn’t supposed to feel like a Female Prisoner Scorpion film. By the end of the third film, Scorpion has started a new life and has essentially buried her vengeance driven personality so it makes sense that this film would not feel like the previous ones right from the start. Her character has moved on and doesn’t need to be the Scorpion any more. It’s not until the final scenes of the third act that Nami becomes the Scorpion once again to strike vengeance upon those who have thrown her away like trash as the film comes full circle.

Granted, even with this viewpoint, Grudge Song still feels scattered in its narrative and it doesn’t quite have the writing to really sail with this idea. I love the idea that this film is using in its approach, but the execution is still patchy at best which accounts for its mid-range score at the bottom. It works as the final moments redeem a lot of the ideas for the rest of the film and Grudge Song still features a lot of strong performances to carry many of the weaker moments in writing, but in the end this film wraps up the Kaji era of Female Prisoner Scorpion on something of a disappointing note when compared to its predecessors.