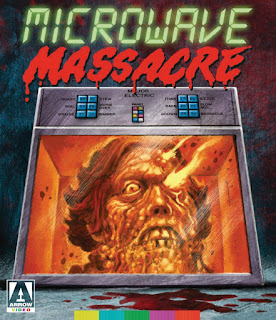 One of the more difficult aspects of being a cult cinema fan is trying to decipher when a movie is just bad or intends to be bad. Once that aspect is decided, it’s looking at whether or not the film succeeds or fails at executing its intent. Even then, in the case of a film like Microwave Massacre, there may be a rift between its intent and how well it goes about it. It’s very obvious from the get go that Microwave Massacre is never meant to be a serious film and everything included should be taken with a grain of salt. Think of it as a Troma film like experience. That’s the mindset to take when heading into this horror comedy. Microwave Massacre never quite carries the energetic outpouring of a Troma film though and it hurts that too often the film sort of meanders around its subject matter instead of running with it. To its benefit, this latest release from Arrow Video does give the film the kind of treatment I would have never expected for a film of this caliber, so obviously there is a cult status and relevancy that doesn’t quite hit a chord with me, but to those interested in the kind of low budget horror comedy shenanigans that a film called Microwave Massacre can offer then this is the perfect release for you.

Donald (Vernon) and his life is going down the drain. His wife May (Ginsberg) despise his simplicity and he can’t even get a decent meal because she only cooks obscure things that he has no taste for. When she buys a massive brand new microwave, things seem to only quickly dissolve further. That is, until Donald finds that he has a new flavor preference. A preference for the taste of human flesh.

Now I’m going to make a statement here that is going to sound absurd considering it’s in a review for a film called Microwave Massacre that stars a stand-up comedian as its cannibalistic lead. There is actually a smart and edgy film at the foundations of this low budget affair. Deep, deep down, there is a film that deserves to be looked at again for some of its social commentary about the breakdown of marriage in modernity and the almost barbaric turns of a kind and big hearted man in response to his inability to handle the changes of the world around him. I don’t think Microwave Massacre ever really runs with any of this as it briefly touches on these topics before embracing its own silliness and stupidity of the script. It’s one of the reasons I found the film to be even more disappointing than expected because there is a smarter horror comedy at its basis, but the film seems to never have any idea it’s there. Perhaps this is why the film has something of a cult status, but throughout the film I kept wanted it to dig into these themes and it never does.

With that out of the way, let’s look at what Microwave Massacre actually embraces. Well, it’s not much. In fact, it pretty much embraces silly comedy more than anything else. Having a stand-up comedian as the lead isn’t necessarily out of the blue, particularly by today’s standards, but the film tends to want to feed him schtick instead of real dialogue that moves the narrative. Occasionally it works, there is a moment where Vernon actually breaks the fourth wall and looks at the camera for a solid laugh and a scene where the television program bleeps out the wrong words had me chuckling, but it’s hard to really build a strong character with depth when all he does is spout meaningless punchlines. This is just one example of why this film seems more concerned with being schtick rather than something that actually resonates beyond its silly premise. The gratuitous nudity, the offbeat silly construction friends, and even the one tone manic shrill of Donald’s wife seem to be more adult cartoon than a horror comedy that wants to be an actual film. In a Troma way, it can work for those looking to just consume the gloriously tasteless humor, but even then it never finds an anchor to really give the film its own human element for an audience to connect with. It’s just joke after joke with little actual horror and less in cohesive narrative.

Arrow Video does give Microwave Massacre some gold star treatment in this latest release and the restoration and brief special features will appeal to those fans of this kind of horror comedy. The interviews with the cast and crew does give a lot of interesting back story to the film that’s worth viewing if you’re a fan (or not, in my case) of the film overall. Just hearing how much love and disappointment about the film from those who made it gives the film more humanity than it ever expresses on celluloid itself and for that cult cinema fans may want to dig into this release. Outside of that though, this film doesn't have a lot of other special features.

All in all, if a super low budget horror comedy appeals to your cinematic appetite then it’s hard to say you will be disappointed in what Microwave Massacre has to offer. It pelts its audience with punch lines and silly, macabre pieces (seeing a naked woman covered in mayonnaise might be one of the stranger things I see on film this year) and in that sense it can be entertaining. It’s too bad that it never actually runs with some of the more clever commentaries that live underneath all of its silliness as it might have risen above Z-grade cinema to at least a B-grade one that’s a bit more deserving of its cult status. Truthfully, if a movie called Microwave Massacre perks your interest than you might as well pick up this release. It’s a film for you.