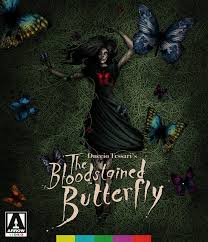 The more time I spend with giallo films, the more the layered spectrum of what defines the genre opens up. When I first started into the genre with the likes of Dario Argento and his ilk, I felt that the over the top style was always key and that there were definite ‘rules’ for how the films played out. With experience though, the genre really has grown to showcase a lot more depth and diversity than expected. The Bloodstained Butterfly is one of those films that really breaths with the different tone than many of its brethren in the genre. At the core of what it is, this film is a giallo, but really it plays its story of a death and conspiracy in a much more grounded and realistic manner which is a lovely change of pace to some of the more lavish and spectacle driven films of the genre. It’s a smart film, packed with intriguing characters, and it really drives home the actual plot rather than style as a focus. This latest Blu Ray release from Arrow Video is a packed one too that delivers a strong set of special features that any giallo fan will want to have in their collection.

When a young girl is found murdered in a public park in broad daylight, the police have to solve it quickly before it gets out of hand. When the prime suspect ends up being a big time TV personality, it gets complicated. As the investigation continues it uncovers an entire world of rich families with secrets that all hold a piece of the puzzle on hand.

What really sets The Bloodstained Butterfly aside from many of its giallo peers is that the film doesn’t try and over exaggerate many of its murder mystery elements. There are no bright color washes. There is no stylized killer. In the place of those is a much more grounded and realistic tone based on how an investigation for a murder would actually take place. A good portion of the film is told through court hearings and in flashbacks initiated from those scenes and it does give the film something of a dynamic structure that isn’t utilized often in the genre from my experience. Most of the first act, after a giallo stylized intro of a butterfly cutout for the credits and a very strong jazzy score, is police procedural. Right down to them taking plaster casts of footprints and analyzing blood samples.  Director Duccio Tessari has an eye for keeping the pacing and detail work at the forefront to catch the viewer and the combination of some strong visuals, led by some impressive cinematography, and the more dynamic time leaping structure make The Bloodstained Butterfly a slow burning but effective thriller.

The second half of the film plays things out a bit more like a giallo would as it starts building the complexity of the cast of characters and their interpersonal relations. There is plenty of tension just within their interactions that at times it’s easy to feel the genre in these moments. The performances throughout are solid and the way that the film is structured builds up a lot of interesting chemistry and intrigue between them which adds to the mystery and realism of how things play out. There is a moment as the second act shifts into the finale that seems a bit unrefined in how it tries to tie up some of the plotting with the police (it feels rushed a bit), but considering it still works with the payoff of the final twist it’s hard to knock the film too much on one rough patch moment.

For this Arrow Video release, there is also a ton of extra material for fans to dive into. Interviews, trailers, and perhaps my favorite – two very enthusiastic giallo fans and movie critics Alan Jones and Kim Newman who give an almost brilliantly entertaining commentary on the film. It’s a lot of jokes and knowledge to take in, but as a blooming fan of giallo it’s these kinds of commentaries that make me want to go even further. As always, the restoration and presentation of the film is solid – and sounds like an impressive cut of the film from the commentary – so fans should be pleased on that end too.

Fans of the genre may not always enjoy how The Bloodstained Butterfly plays things in a more realistic manner, but for this newer fan it’s something of a refreshing new approach. It has a meticulous focus to things like character and plotting that comes off as much smarter than its fairly obvious ending. It’s just executed in a strong manner to sell everything. This isn’t quite your usual giallo, but it’s easy to see why Arrow Video spent so much time and effort on this release. It’s a film quite deserving of it.