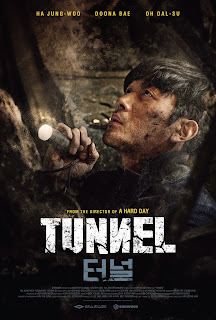 Lee Jung-soo (Ha Jeong-woo) is a salesman for Kia Motors, making his rounds and traveling about one day. He's got a cake for his daughter, topping the car off with fuel, and heading home. On his way, he calls his wife to let her know how things have been, when suddenly a tunnel he is passing through (newly opened and everything) decides to cave in and trap him inside his car with nowhere to go. With that set up out of the way, let's dive in to one of my favorite films of the year so far, Tunnel.

Given director Kim's previous film, A Hard Day, I went into this new film with high anticipation. Add to that the fact that the trio of leads in the film are some of my favorite performers in the region, and you have a recipe for a delicious slice of Korean film goodness, and it most certainly is just that. 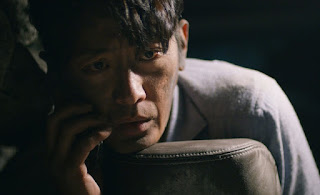 While very straight-forward, you can see the light at the end of the........ tunnel (sorry), the journey getting to said end, and the struggle Lee goes through in this film completely engages you and has your attention for its entire two plus hour run time. The early scenes, where the tunnel initially collapses as he is driving through, left chills on me and moments like this scattered are about. When the danger redelivers itself time and time again, it had me on edge and I loved every moment of it.

The melodrama is thick throughout, but it never feels over-the-top. I don't think I've felt feels like this from a film in quite a while. It hits hard and all of the characters, including some of the smaller ones from the rescue team working to get Lee out of his awful situation, are well fleshed out and seemingly all understandable in their thoughts and actions, no matter which side of the fence they are on while continuing the rescue or not. You get where they are all coming from and makes the tiniest moments even more impactful. 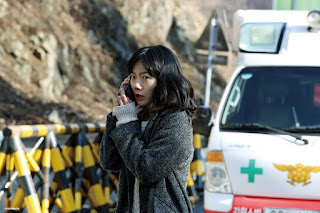 Ha Jeong-woo is absolutely fantastic as Lee Jung-soo and while the role is more physical in general with being trapped in such a tiny space for so long, his determination and humanity in the situation really shines through and sort of feels inspiring. You don't really learn a lot about him with a secret past or anything like that. He is just a normal human being and I think that was a very smart thing to have done.

The other characters, such as the wife (Bae Doo-na), while not having much to do through the film, as she can't since there is not much she can do for the situation, serves as the backbone to everything and her calmness is very soothing given the intensity of it all. Lastly, Oh Dal-soo is as solid as ever as the lead man of the rescue operation. Again, all of the characters and even the plot is very straightforward, but everything works perfectly. 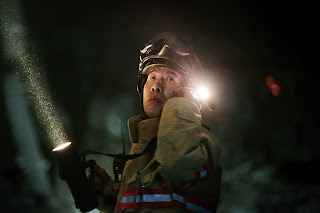 In terms of the technical side of the film, again, everything is spot on and perfect for this picture. The cinematography is creative given the tight spacing, the lighting and mood brings a real sense of claustrophobia, and the documentary like camerawork with the news crews and such all blend together quite nicely. The pacing never really lets up, except in the middle, but without spoiling it is perhaps my favorite chunk of the entire film. The music, while a bit to loud for its own good at times, never felt overly intrusive, and more often than not really helps add to that emotional core that holds everything together.

Tunnel is a film worthy of high praise, and I really hope it is one that does well outside of Korea (where it is currently doing very well at the box-office). It is human drama at its finest, though it may get a little heavy at times, again, given everything happening, it is completely believable and absorbing. This will without a doubt be in my best of the year when all is said and done. See this film!