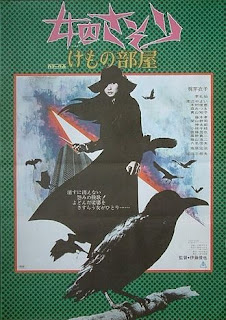 One of the fascinating things about the Female Prisoner Scorpion series is how each installment breaks just enough new ground to remain feeling fresh and unique on its own without sacrificing the style and blended pieces of genre that made them so uniquely impressive to begin with. Even though the third film in the series Female Prisoner Scorpion: Beast Stable is a slight step down in quality from the first two [you can read my thoughts on the first film HERE and the second film HERE], it’s also an ambitious and large step down a new path for the series that sets it aside. Like its predecessors, Beast Stable is the kind of film that rises above its more controversial pieces into a film of more artistic merit, although it doesn’t quite find the tightness of its writing to sell some of its higher end themes.

Scorpion (Meiko Kaji) is on the outside world now, but she’s ruthlessly hunted by the police. After ‘disarming’ a particularly vicious detective on her trail, she ends up crossing paths with an odd young woman (Yayoi Watanabe) and her old prison mate. Together they reignite a friendship that isn’t your normal one and Scorpion empathizes with her plight as she sells her body for money and attempts to keep her disabled brother alive. However, their friendship also leads Scorpion into a new realm of oppression on women…and her rage begins to boil once again.

By the end of the second film, Jailhouse 41, Meiko Kaji’s anti-heroine extraordinaire Scorpion had morphed from a self-focused manifestation of vengeance and into a legendary anti-establishment, pro-feminist force of reckoning. So it’s not all that surprising that our favorite stoic outlaw would continue down this path for Beast Stable. This new focus for Scorpion as a voice (and fist) for others takes the series down a new and often intriguing path. The film introduces some new twists to the formula by reversing the structure of the second one (having the prison sequence take place at the end rather than the beginning) and a slightly redefined social commentary that’s spurred by Scorpion’s rediscovered friend Yuki and a focus on having Scorpion help other women in need. Right from the beginning, there is a sense of expansion as the film opens up with Scorpion evading the police before it moves to explore Yuki's story. This allows the audience to build a connection to a new young woman along with Scorpion and focus down on how this allows our titular anti-hero to see that she must also be the act of defiance when other women cannot in a patriarchal system that seems unbeatable. This is expanded to including a forced prostitution ring that Scorpion becomes entangled with and I’m sure one can guess where things go from there. Needless to say, vengeance comes in a black hat and wielding a knife.

Beast Stable however doesn’t completely ignore the things that made the series so popular. This entry may not be a women in prison or a rape and revenge focused plot, but it certainly doesn’t ignore those as a part of its history. As I mentioned, Ito and company even throw in a prison sequence at the end to make things come full circle and it fits nicely. The film will occasionally throw in some exploitative elements to replace those that are not repeated, including an entire subplot that features incest in a strange and off beat manner and the film has a rather unique spin on being upfront with its themes of pro-choice when it comes to women’s health and children which is shown in perhaps one of the most graphic, yet artful manners. Director Shunya Ito retains a lot of the surrealistic aspects that give this series such a distinctive look too and fans will be excited to see elements of horror, the bright colors, and exaggeration of detailing is still utilized as a large part of the film. It’s not used quite in the effective symbolism that graced Jailhouse 41 or in the theatrics of the original, but it’s there and it retains that style and tone which is still a welcome piece of the whole.

It’s true that Beast Stable doesn’t quite reach the heights of its two predecessors, but the further character development of Scorpion (she smiles AND cries in this film!) and the new paths of exploration of the character and her role in the world is fascinating and worthy of some hefty praise on its own merit. For this release, Arrow Video also packed on quite a few extras to keep fans interested particularly when the restoration itself is not quite as dynamic as many were hoping. In particular, there is an interview with film critic Kat Ellinger that is the highlight of this release and one that fans are most definitely going to love as she digs into the relevancy of the series and Beast Stable compared to some of its cinematic peers. It seems each film has at least one glorious interview that’s worth the purchase, so keep that in mind when looking at this box set.

In the end, Beast Stable is a welcome addition and exploration of the Scorpion character with plenty to love from fans while it treads on some new ground. It retains a lot of the same style, tone, and themes of the series and the additions of new characters make for another riveting adventure for fans of both exploitation and arthouse films. Beast Stable comes highly recommended. 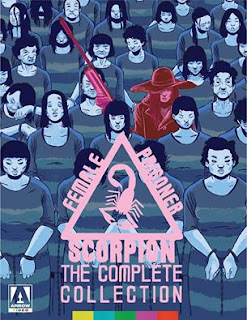