Similar to what I have been doing with earlier Blood Splatter articles, I wanted to cover some of the action movies I may not have had time to cover with full reviews. Well, some of these films also didn't deserve full reviews as you will see in this and/or future installments. For this edition of The Blood Splatter, we cover three 2016 straight to home video actioners with lots of action star power: Code of Honor, Standoff, and Jarhead 3. Enjoy. 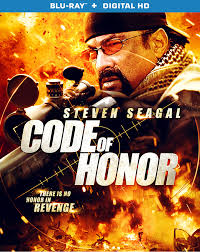 In the range of modern Steven Seagal flicks, Code of Honor falls in the middle albeit pushing towards the more impressive side of things. What works for this one is that it's ambitious, perhaps a bit too ambitious for its budget as post-production effects are not all that great, but it really attempts to create a memorable action film for its fans. Craig Sheffer works well as a down and out FBI agent on the trail of a super vigilante (a villain role that Seagal normally doesn't play, so bonus points there) and the film layers in an ambitiously complex plot to keep things interesting that plays Sheffer and Seagal off on one another. There is some shockingly strong secondary roles for actors in this one and the action is fun and brutal - a theme that actually plays a part in its story. Occasionally there are some really cringe worthy moments where the film seems to meander off course, including some terrible fake news broadcasts and a strip club scene that seems to be placed in there simply because Seagal must have it in his contract that he has to be in a strip club for part of every film he does now, but overall this film exceeded my low expectations. It's mostly for fans of low budget, straight to home video actioners, but even then it's one of the better ones this year. 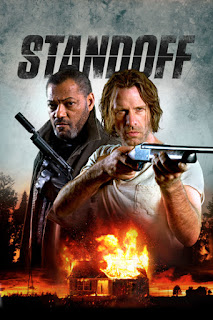 Having two heavy weight cult actors like Laurence Fishburne and Tom Jane square off in an action thriller that's 95% set in and around one house is just as awesome as it sounds. Considering that Standoff went straight to home video is almost an insult to how ridiculously fun and shockingly strong this film is. Fishburne is delightfully evil as the hit man who's caught on camera performing an execution in a remote graveyard by a little girl and Jane is heroically flawed as the down and out military man on his last legs, but the true surprise comes in the form of a young girl who steals a lot of scenes with the help of a director who has an eye for visual punches. The banter between Fishburne and Jane is tense, despite the fact that they rarely appear on screen together (even though it's essentially a one set film) and Jane holds a remarkable chemistry with the little girl to sell the heart of the script. It's a simple film, but that's what allows a lot of the great pacing, characterizations, and underappreciated acting talents of the cast to work in such robust detail. Truthfully, this is one of the better genre films released this year and one that will most certainly go overlooked as a straight to video gem. Don't miss out on this one, Standoff is worth finding. 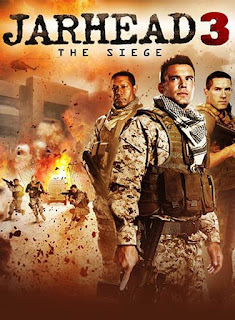 Earlier this year, I was shocked at the quality of Michael Bay's military siege film 13 Hours and gave it a relatively positive review. So is it really out of the range of possibility that there would be a straight to home video knock off of it? Jarhead 3, in what remains to be the one of the most perplexing franchises ever, is essentially 13 Hours: The Low Budget Version that focuses on more action and less execution. It's entertaining on a B-movie level, particularly when the final 45 minutes is sincerely non-stop gun battles and it earns some bonus points for a well needed appearance from A-class, B-movie star Scott Adkins, but Jarhead 3 is never good. The performances range from over the top to phoned in (I'm looking at you Haysbert) and the low budget prevents it from ever really having the sense of realism it desperately needed. Not to mention, it's attempts at political and social commentary about war fall very flat and occasionally trip into being straight out dumb. For action fans, it will work for a watch with its relentless combat in the second half. For most others, this is going to be a skip.