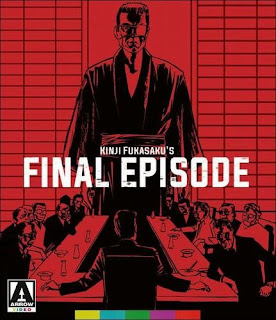 As far as original writer Kazuo Kasahara was concerned, the Battles Without Honor and Humanity series was finished after the fourth film Police Tactics. Truthfully, that film did feel like a solid ending to the story that was being told. Many characters reached their logical conclusion and the arrival of an agreement between smaller warring yakuza factions to create a political coalition that essentially ended their yakuza focus worked. End of story, right? Wrong. Popularity with the series led to there being at least one last film in the original run (there is a spin off series that would come soon after too), but original writer Kasahara did not come back. However, almost everyone else did including director Kinji Fukasaku. The results are the aptly titled Final Episode, a solid and entertaining installment into the Battles series that too often gets written off as an inferior and ‘tacked on’ ending to the series. Final Episode however fits the style and tone even if it occasionally lacks the depth and subtlety of its predecessors to make it a worthy sequel.

Hirono (Bunta Sugawara) has been sentenced to prison time. His rival Takeda (Akira Kobayashi) has taken the Tensei Coalition into a clean territory as a political party and shed much of their yakuza roots. However, not everyone in the coalition is as keen on their new image as the management. The low level members of the gangs are tense in the streets and heads that form the coalition are bickering for their own power. This leads a standoff between chairman-to-be Matsumura (Kinya Kitaoji) and rival Otomo (Jo Shishido) that only adds to the tension and fear the group has for Hirono, who is soon to be released.

In a way, Final Episode feels like a transition film. As it was mentioned in the introduction paragraph, but by the end of Police Tactics the stories and characters of Battles Without Honor and Humanity had essentially come full circle and the timely era that the films covered was in transition itself. So it makes sense that Final Episode would also seem more like a transitional film, moving the series slightly away from its very gritty roots and into something less dense and a bit more ironic. It carries all of the same style and tone, even perhaps maximizing the sinister skepticism for its “political coalition” that was always present and running with it in a broad stroke manner, but there is something different in the writing that seemingly intends to breathe new life into the series. Most fans seem to despise these subtle changes in the writing, but I found it gripping and fresh feeling. Final Episode is different, sure, but it’s also got a little kick in it that the last couple of previous entries sacrificed for the density of its subject matter. This difference in writing usually manifests itself in more action and more over the top elements, but it doesn’t negate the foundations that the series was built on so it’s hard for me to say it’s worse more than it’s simply different.

Akin to other films in the series, Final Episode has some solid execution going for it outside of its writing. Kinji Fukasaku once again returns to continue with his almost documentary like style for the film, focusing on lots of handheld and gritty action, fly-on-the-wall meetings, and a structure that brings back the narrator to bridge time gaps and exposition to keep the pace and inform the audience on detailing relevant to the plot. As I mentioned, there’s even more action and it seems that with the over the top elements of the writing that Fukasaku embraces it a bit more and gives some artful design to the action. Kills seem to take longer than ever before in the series and more bullets have to be fired to do so. It’s a recipe for instant action. This is, of course, all punctuated with another round of phenomenal performances. Bunta Sugawara and Akira Kobayashi both return as their characters from previous films (there are a few smaller roles given to some familiar faces that fans will instantly recognize), but this time their roles are diminished. Final Episode feels like a transitional film and in a way this is exemplified in how both of their characters are utilized. Kobayashi’s character attempts to mentor a young new leader for the coalition, played with an intense screen demeanor by Kinya Kitaoji, and Sugawara’s Hirono is almost a threatening presence throughout most of the film until the final act. This allows time for some new characters to develop and run in the series. Kitaoji nails it as the young and ambitious Matsumura and his rival is series newcomer Jo Shishido who goes full out Al Pacino in his role as an old school elder who hates the new coalition approach. The series introduces and re-introduces a slew of other characters into the mix, but like the rest of the Battles series, it moves at such a pace that they aren’t given nearly as much screen time as the complex plot unravels. They make impressions when they have the screen, but the writing doesn’t necessarily promote in depth work for many of the secondary roles.

Despite many of the negative reviews of Final Episode, I felt that this fifth and final film in the series fits very nicely into the format and even expands it a bit more than previous entries. At times, it would seem to be an indicator for a transitional phase for the franchise with its newer more over the top characters and more action oriented plotting – I have not seen the New Battles series that followed this so perhaps it is, but it still retains a lot of the same style and effective execution that made the series so good to begin with. Fans will certainly enjoy many of the aspects that it has to offer, even if it isn’t the best of the series. I know I was certainly pleased with Final Episode.