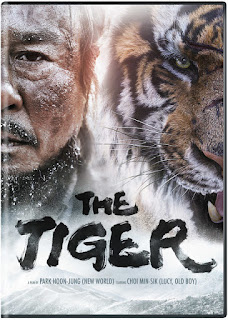 Sometimes, it’s hard to keep expectations in check when films are crafted by massively talented individuals. I did my best to keep my own hype down for The Tiger for just that reason. Director Park Hoon-jung delivered the jaw-dropping South Korean gangster flick New World just a few years ago and that was only the latest in a string of impressive films he has written and/or directed. Needless to say, even with tempered expectations there was a lot of hype behind this one, a film he wrote and directed, and with the powerful onscreen persona of Choi Min-Sik, it only went up. Fortunately, The Tiger not only lives up to these expectations, but easily surpasses them with a graceful flare as it delivers a dramatic film that entertains on the surface and layers itself so immensely that even days after the film had ended I feel like I’m discovering new things about it. Yeah, it is one of the best films of the year.

Chun Man-duk (Choi Min-sik) has never lived an easy life as he attempts to raise his teenage son Seok (Sung Yoo-bin) and tries to forget a past that haunts him every day. But it’s 1925 and the occupying Japanese force has arrived in the small town at the foot of a mountain to make a statement and kill one of the last tigers in Korea, known as the Mountain Lord, and Chun Man-duk finds himself at odds with the Japanese, old friends, and his own son.

Park Hoon-jung and company truly knock The Tiger out of the park. On a surface level, sometimes this film seems to be award season bait – a trait that doesn’t necessarily scratch my back like it does for some people – and its historical period of Japanese occupation and impressive casting only bleed into that thinking. It’s good, on the surface level, as it navigates some dramatic father and son issues and ignites the screen with some very impressive performances. The look of the film is moving and for a South Korean effort, the computer generated effects of the tiger are pretty striking even if it’s still a step or two below what the Hollywood industry is churning out. Park Hoon-jung has a knack for keeping a long film like this one feeling brisk in its pacing without being a detriment to the atmosphere or dramatic tension needed to sell the characters. At almost two and a half hours, this is surely a blessing in disguise. Even more impressive though is how the film handles some of the more advernturous action scenes where our titular tiger goes full berserker mode and slaughters his hunters. It’s shot with a strong focus and an eye for pacing the scenes as it utilizes its burst of (sometimes extreme) violence to break the tension of its dramatic beats. I certainly didn’t expect a film like this is have such an extensive body count, but I’d be remiss to say that it didn’t fit nicely with the tones and style of the rest of the film.

All in all, these are the things that made The Tiger good, but it’s the writing that most certainly makes this film phenomenal. If anything, this might be the strongest film that Park Hoon-jung has ever written as it takes the strong visual and tonal execution and then layers it with some very thoughtful and robust themes and concepts. Not only is this a character driven film where the tiger is one of its main characters, but the sly way that the film goes about making thematic connections between the characters, setting, and tone is something that any self-respecting cinephile is going to want to study and tease out the depth. In one scene, the tiger and the old hunter, whom is played with screen devouring style by Choi Min-sik, are inherently connected and their lives parallel one another as they are seeming wrought with tragedy brought about by one another and then slowly suffocated by the Japanese army. Yet in a wholly different scene the tiger stands for the heart and soul of the Korean people who are dealing with such a forceful invader and trying simply to survive. Then again, in yet the next scene the tiger stands for man’s connection with nature and how balance must be achieved through respect and understanding versus dominance either way. To make things even more effective, never at any time during the film did I feel that these themes contradicted or battled one another, but the film simply layers them upon each other and gracefully pulls each one to the surface when it's needed.  It’s beautiful in its own way.

The Tiger is a film that truly aspires to be the layered artistic form of cinema that will be just as effective in 20 years as it is today. Park Hoon-jung drops the mic on this one with his robust writing and stunning execution of the visual and tonal elements. Everything in this film is to be admired in one way or another and if you are a fan of legitimately deep and thoughtful filmmaking then you owe it to yourself to see The Tiger. Easily one of the best films PERIOD in 2016.