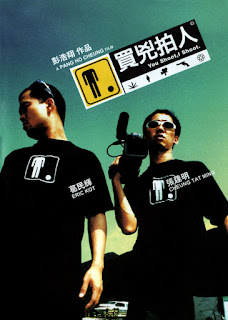 You Shoot, I Shoot (YSIS) is a sharp, crazy, sometimes cheesy, but nonetheless fun debut from Hong Kong auteur Pang Ho-cheung. YSIS tells the story of a killer named Bart (Erik Kot), a hitman who is as open about his job as a door greeter at a store. Everyone knows it, and he gives no cares. He takes money from a rich woman to kill people selected by her, but that isn't good enough anymore, now she wants people dead and recorded proof of this heinous deed to for her awful viewing pleasure. That's where Bart meets Cheun (Tat-ming Cheung) a down on his luck assistant director who isn't finding any work, instead finds himself desperately looking for people to buy weed off of him during his first day as a petty drug dealer. Let's just say without spoiling too much, the two quickly come to terms with one another, and thus begins a 90-some-odd minute ride of blood and laughter. 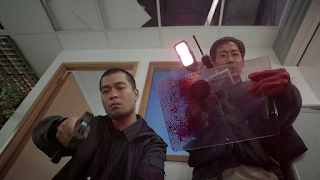 The dialogue and gags go at 100mph in this film and it never stops, which is its greatest strength, and to a degree, its weakness. I found myself laughing more often than not, but some of the jokes just did nothing for me. Sometimes the over-the-top music and acting works, and other times it falls flat on its face. That said, this is one of the best concepts I've seen for a comedy, and I love just how dark the humor gets at times. There are also great moments and little glimpses of a serious beat or two, although they usually only last a fraction of a second. This movie isn't meant at all to be taken serious and it is very self aware of that. The performers facial expressions are so loud and theatrical, I found myself constantly grinning.

The constant banter between Bart and Cheun is one of the highlights of the film. I don't want to go too much into the jokes, because that ruins the experience, but a scene that cracked me up is one where Bart and Cheun are eating a meal with Bart's wife and his in-laws. They all openly keep talking about Bart and his murderous job and sometimes they would be secretive about it at the same time, between one another, but moments later, Bart and Cheun are in the kitchen when in enters the father in-law. I won't spoil, but it is one of the funniest bits in the film. The entire scene is great, and Siu Yam-yam steals it. 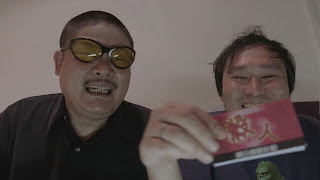 The sexiest killers around...

The cinematography, one of the great staples of a PHC film, is fine throughout, mixing wide angle close-ups on certain characters, particularly used to great effect in a small but memorable role by the always solid Lam Suet, and an MTV music video editing style that occurs throughout, surely a product of the time (early 2000s). It works with this film and adds to the zaniness of the overall story. The sounds are obnoxious and in your face, at times even in sync with some of the quick editing. I really like the way the film would cut to the poor video quality of the camcorders Cheun gracefully wielded throughout. The very first time they present their 'movie' to the rich woman is one of the greatest moments in the entire movie. It hit home as a person who has made movies since an early age. The film seems to be reflective of Pang and his passion for movies in general, as we have a director for a lead character and many, many posters thrown up throughout his lair. The references to Scorsese throughout are genius. 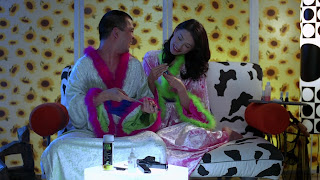 Does this gun match my outfit?

As much as I enjoy this film, I do think it stumbles at times, as I had previously mentioned, with some of the jokes or ideals just flat out not working. I thought most of the stuff with the Michiko character didn't really add anything to the film, but there is one great scene (which I won't spoil) that makes her presence worth while. Again, it's meant to be laughed at and that's what I spent the majority of the running time doing. The entire third act of the film is by far the strong point of it all. The set up, the jokes, the timing, the editing, the pay-off and punchlines are all very strong. In fact, I like the last 20 minutes or so much, I think it raises the rewatch value greatly.

I do fancy a good black comedy from time to time, and You Shoot, I Shoot delivers almost constantly. While not a perfect film, and sometimes it shows its age, I think it is one of the better films from Hong Kong of that period. It certainly is an excellent debut film, and it shows a strong sense of style and wit from Pang that would continue to help mold him into one of the finest directors from the region working today. A healthy start to a strong string of films.