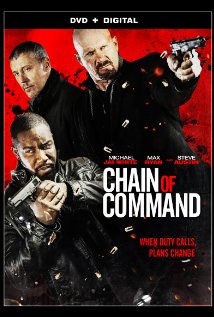 There is a fine line between being so bad it’s awesome and so bad it’s awful. When it comes to straight to home video action films, that line can easily sway one way or the other depending on a slew of factors. For Chain of Command, I was hoping that it would be the kind of film to lean towards being awesome. The combination of Michael Jai White and Stone Cold Steve Austin as opposite sides of a drug conspiracy in the military simply sounds awesome. Unfortunately this is anything BUT awesome. In fact, Chain of Command is something of a super awkward film filled with amateurish executions and failed concepts. It is, quite frankly, one of the worst action films I’ve seen this year.

When James’ (White) brother is killed in mysterious circumstances, the ex-military operative uncovers some questionable tactics between his brother and his old military buddies. When he starts to unravel an entire drug operation though, a tough hitman (Austin) is brought in to stop him.

The big take away that I had with Chain of Command was the failure of the film to capitalize on its B-action cast and concept. If you have Steven Austin and Michael Jai White in your cast, you better have some awesome action set pieces for them to shine in. I’m not going to pretend that either of these guys are great actors and Austin has trouble caring a film on his own, but if you throw these two guys into a movie there is an expectation that no matter how bad it is, it will at least be an action packed film. Chain of Command is not. The film plays out more like a thriller overall which limits the various action sets, as does the film’s super low budget, but even when they show up they are terrible. Michael Jai White is a phenomenal fighter and has a vicious on-screen presence and this film has no idea how to use him. He has a handful of hand-to-hand fights that don’t work at all and the few “chases” are horribly paced to be tense. To make matters worse, the final matchup between Austin and MJW is about as lackluster as they get. At that point though, I was convinced that the film was trying to fail.


The rest of Chain of Command can’t hold up either though. Director Kevin Carraway doesn’t seem to have a lick of sense on how to keep the pacing, editing, or cohesion of the film flowing. Almost all of the character actions are hilariously bad or horrifically forced (sometimes both), it’s littered with dialogue that doesn’t work, and the execution on all fronts is sloppily put together. The fight choreography is wooden, the edits are jumpy and ineffective, and the performances are shockingly poor. I mean, Steve Austin is always terrible but here he seems particularly disinterested. There is no fun to be had, no thrills to be had, and no unintentional humor to carry this film. It’s truly some bottom of the barrel material.

If there is anything else to be said about Chain of Command, it’s that you really shouldn’t even see it out of curiosity at how bad it is. I had some limited expectations that this film would be a fun little direct to home video actioner, but there is nothing enjoyable about watching this formulaic and poorly executed film. Keep your distance from this one and move on to other more enjoyable B-action flicks worth your time and money.