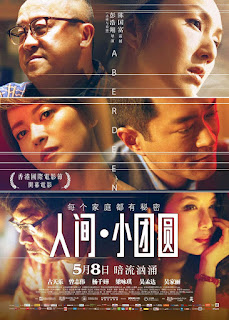 This is one ambitious film. Aberdeen tells the stories, and there are a lot of them, of a ton of people in a pretty broken family. Louis Koo plays a well off, handsome man, with a daughter who he loves, but help can't but think that she won't succeed in life, due to her size and her physical appearance. He's sort of a dick, even if he doesn't mean to be. Gigi Leung plays as the mother of said ugly kid, who is a model and an actress who is down on her luck as age is starting to work against, well, her work and particularly how much of it she is getting. Eric Tsang plays a doctor who has a fling with a young nurse (Jacky Choi), and is a good man at heart, just full of sexual angst. Miriam Yeung plays as Tsang's wife, a woman with the past of her Mother's death constantly haunting her and causing her to have major writer's block. Lastly, Ng Man-tat and Carrie Ng play another couple, set with their own personal problems as well. Essentially, in a nutshell, this movie is about the hardships that people face and the ways they can stay hidden even from the people your are very close too, and sometimes those hardships, as difficult as they can be, can truly bring people together. That's a lot of set up, I know, but this is a difficult movie to describe.

I will first start off with a typical praise that I have given to all of Pang's films in this project I've worked on, and that is that the film is absolutely gorgeous to look at. Sometimes, the flaring off the lights and the crispness can look a bit too much towards the artificial side, but this film definitely has a fantastic style and really helps to craft it's large inhabited world. That world is filled with very, very interesting characters, that while they are large in number, get developed quite well, for the most part. Some of these characters you will really find yourself digging into and others, you probably won't care much about. The film's biggest problem is it has too many characters to juggle for such a short run time. As odd as this sounds, I really wish the film was longer, as in about an hour longer. This is one of those films that needed to feel more sprawling and interconnected. I mean we do spend time with every character one on one, but some just crop up and kind of drop off until needed again. I mean, it usually works, but Ng Man-tat's and Carrie Ng's characters I feel just did not get enough time on screen. When they finally came back on, I was like, oh yeah, they're in this.


I won't go into the character's I liked and didn't like, as it would take forever to get to them all, but I will say they were all interesting and each of their flaws and struggles were unique, and despite what I said of Koo's character earlier, I liked that he just spoke his mind. Even if I didn't agree with all of their thoughts and ideals, I admire that some of the characters just came across that way. Acting wise, everyone here does a wonderful job, and in particular, and again I wish there was more of the character in the film, I think Eric Tsang did an absolutely wonderful job. Admittedly it was odd to see his character in a certain situation early on, but I must give praise to someone of his reputation and caliber of respect to do a scene like that. That's not to say the scene is trashy or demeaning of the man in real life, but rather that it takes a lot for anyone to do a scene like that, and I just want to give him props. He brings a real human quality to his character, regardless of some of his questionable actions on screen.


There are some smaller cameos that are semi-distracting, but considering this movie is made up entirely of primarily big name actors and actresses, they sort of fit in and all do a fantastic job, in particular Chapman To, who again I wish could get even more serious guy time onscreen. He's a wonderful dramatic actor, though this is more of a bit role for him. I liked the Koo / To duo, but I wish the Star Wars and some of the product placement in the film wasn't so heavy. I understand it has to be there, but I am probably just sounding like a nitpicker now.


Some of the symbolism in this film is a bit heavy-handed, but I do respect the weird and surreal elements the film juggles in, which it does with ease, usually, in particular a sequence with Miriam Yeung's character in a taxi left a strong impression on me. Another shout-out I want to make is to newcomer child actress Lee Man-kwai as Koo and Leung's daughter, Chloe 'Piggy' Cheng. I think she did a wonderful job, and she carried a lot of the film, and had some nice wing chun filled moments.

This is a film that is going to be watched by me again in the near future. I thought about watching it for a 2nd time before writing this review, but in the end I decided to go on how I felt after watching it recently for the 1st time. It's good, but not great. I think, again, it could have done a lot more with its numerous characters and intriguing world it was wonderfully setting up. I can say with confidence in the end though that I quite enjoyed it, but I feel it falls under its own ambitions more often than not. I wondered after it was over if there was a longer cut, and if Pang had to cut it down in the end for commercial purposes. Regardless, it's a good film, but not one of his strongest. It's a film I like, but feel very on the fence about. I would say see it if you are a fan of his works. It comes recommended with certain things to keep in mind.

Posted by Josh Parmer
Email ThisBlogThis!Share to TwitterShare to FacebookShare to Pinterest
Labels: Drama, Heroes of the East, Pang Ho-cheung