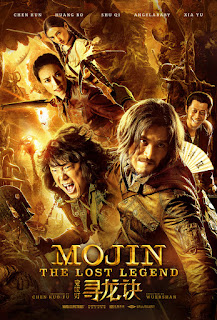 The continued momentum that the Chinese market has propelled itself with to Hollywood heights is getting more impressive by the day. With each passing blockbuster, the results are a bit more spectacular and a bit more cohesive in their approach. This is why I was pretty excited to dive into the latest attempt at franchise expansion from the East with the film Mojin: The Lost Legend. Interestingly enough, unlike the new approach to Hollywood, Mojin doesn’t seem intent on appealing largely to an international audience with its strong cultural elements. Outside of that though, the film runs on some strong tropes for the action adventure film and even goes into a bit of 80s charm to get things down. It’s not nearly as fun and effective as I expected, but it’s still a blast with plenty of outrageousness to be had.


Hu Bayi (Chen Kun) has struggled when his group of treasure hunters decided to call it quits and his relationship with his fellow teammate (Shu Qi) is as rocky as ever. When his old partner (Huang Bo) is hired to find a mystical stone that will allow him to reconnect with a tragedy in their past, he has to jump back into the game…but it might be the last time he does.

On the surface, Mojin is a fun (and occasionally overzealous) action adventure flick. It opens with a nice little explanation of who our characters are and just what their version of tomb raiding happens to include: traps of outrageous design, feats of kung fu physics annihilation, and a magic compass. Tonally, it very quickly establishes the rather fantastical elements of the film while trying to retain a grounded sense of danger so the audience doesn’t think they are watching a super hero movie. Think of the Brendan Fraser Mummy franchise for a good comparison in how it goes about unraveling its narrative and atmosphere. This allows the film to add in a lot of colorful characters, a villainous cult, and some character dynamics to add to the fun. If anything, this is what Mojin does best – it entertains. The action is pretty ambitious with tons of CGI and outrageous magical pieces (green phosphorus traps that burn the shit out of you!) and the stacked casting adds enough flare and charisma to keep things held together. Mojin moves at a lightning pace and it has a lot of great qualities to be the popcorn blockbuster it wants to be.

Unfortunately, Mojin also happens to be a bit too ambitious with how it goes about establishing the characters, premise, and dynamics of the narrative. There are a ton of flashbacks to establish a moral reasoning for the characters about ‘letting go of the past and embracing the future’ and it can derail the actual plot on hand. The villains of the film, despite some gimmicky looks and outrageous performances, are undercooked to be properly consumed – it’s a cult, but really? – and the narrative has trouble giving time to really capitalize on some of the more emotionally effective beats in the final act as it proceeds to throw everything at the viewer, including zombies. In the end, it’s entertaining but it has a much stronger foundation of characters and meaning that it tends to bury underneath the visual pizzazz of the film. Mojin wants to be more, but doesn't quite know how to balance it.

While the film succeeds at entertainment and disappoints in its lacking substance, the most interesting element of Mojin is its focus on Chinese culture, history, and a bit of mysticism. While Hollywood continually tries to water down their blockbusters to appeal to an international audience (specifically China, oddly enough) this blockbuster most rigorously uses the cultural foundation of its Chinese heritage to its benefit. It’s to the effect that, as a reviewer who only has limited knowledge of Chinese history and culture, it felt like I was missing out on a lot of little details of understanding that would make the film work better. In particular, a flashback to the late 60s for two of our leads repeatedly references General Mao and a cultural state of mind for a group they are with. Without prior research, I was a bit in the dark about what they were trying to state with these elements. However, I appreciate the film's knack for being entertaining and adding in a bit of historical relevance to the mix.

All in all though, Mojin is still quite the entertaining film full of fun performances (Huang Bo steals every scene in this movie) and tons of outrageous action set pieces. It’s not nearly as effective in its narrative or moral foundation as it might have been, as it tends to jump back and forth between focuses, but for the average film viewer it’s going to work to keep things on track. Oddly enough, Mojin does set up the idea of a franchise ridiculously well and with a lot of the character introductions out of the way – a sequel might establish a stronger film overall.