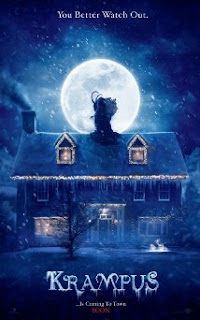 Writer and director Michael Dougherty made a massive splash with his debut film Trick R Treat that both crafted a terrifically dark and humorous horror film and celebrated the Halloween season with remarkable ease. So when it was announced that he would be taking a turn at delivering a Christmas horror flick, it was hard not to get excited. Krampus, while not quite as good as Trick R Treat, is still a whimsical film that works both as a classic fantastical horror romp and a Christmas film, continuing the streak of strength in delivering holiday themed horror. It’s not quite perfect, but the entertaining value of the humor, horror, and holiday themes makes it one that will remain a Christmas time film for any self-respecting horror fan for a long, long time.

The holidays always brings out the ‘good will toward man.’ For Max’s (Anthony) family, having their aunts, uncles, and cousins over means arguing, bitching, and general discomfort for the entire clan. When a massive blizzard knocks out the electricity and phones, the family will have to learn to deal with one. When a legendary evil spirt, the anti-Santa named Krampus shows up, the family is going to have to learn to depend on each other if they are going to survive.

There is a lot of holiday horror films any more. Just this year we have seen a bunch of various Krampus inspired horror flicks get released including a tale in A Christmas Horror Story and the straight to home video flick Krampus: The Reckoning. While I have never seen some of these, I can’t imagine that they can match the sheer ability to mimic and utilize the Christmas movie tropes and structure like Krampus does. While Trick R Treat might have been the perfect way to mash holiday spirit with horror elements for Dougherty, he does an admirable job at injecting his brand of humorous horror into the Christmas film blueprint. Whether it’s the small things like music or font for the opening credits or the larger things like the moral structuring of the film and the “dream like” ending (which is not nearly like it seems), Krampus nails the Christmas tone for the movie and it gives it a bit of that magical feeling that it needed to work.

However, Dougherty’s ability to inject holiday elements into his films is not the only great thing on display with Krampus. In this film, the horror pieces work like a charm too. Not only is the character of Krampus this foreboding figure of fear that creates a sense of tension and dread for the audience, it’s almost expected that he will be a kind of demonic Kool-Aid man even though he’s more of a presence than the main antagonist, but the film is littered with all kinds of Christmas horror monsters to keep things unique. The use of practical effects with these elves, toys, and evil fuckin’ cookies make them ultimately real and often terrifying in their execution and design. There horrific monsters and set pieces are well set up and the film knows to balance it out with a bit of humor to keep things light. Krampus also uses its PG-13 rating as a benefit to its horror as it relies more on visual storytelling, atmosphere, and tension to deliver its scares versus scares. Although some of the designs are scary enough, I’m shocked it didn’t get an R rating just for a Jack-in-the-Box that swallows kids whole.

While the film doesn’t quite have the effective and complex storytelling that Trick R Treat had, Krampus is still an impressive horror film that’s worthy of the yearly watch that it will garner. If anything, this film just further proves in Dougherty’s skills as a director (and a writer). It’s a film that some people might have some issues with considering its humor and its off beat ending, but for this reviewer it’s an instant classic.