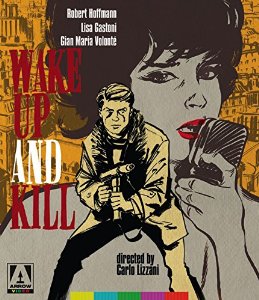 
Also Known As: Wake Up and Die, Too Soon to Die

I’d be lying if I said I was a Euro Crime film expert by any means. For the most part I’m not even the most qualified write for the genre that contributes for this site, but as a cinephile that tries his hand at most genres once or twice I decided to dig into Wake Up and Kill as one of my first reviews for the genre. While Wake Up and Kill certainly has its merits with a very modern and artful approach to its narrative, it also tends to be a bit long and often unfocused as it goes about telling the tale of real life jewel thief Luciano Lutring. It’s a mixed bag overall and one that wasn’t nearly as campy or violent as I was expecting, but one that will definitely find its cult audience with this new Blu Ray/DVD release from Arrow Video.

Luciano Lutring (Hoffmann) leaves his life as a grocery store clerk to pursue the life of a small time crook, smashing windows and grabbing jewelry to sell. When he falls in love with a club singer (Gastoni) though, his life quickly becomes more dangerous as he sets out to give her all the things she could want…and making plenty of enemies along the way.

Wake Up and Kill is lucky to have so many great pieces working on the film because without the charismatic performances of its two leads and the visual flare of director Lizzani, it could have easily been a forgettable crime drama romp. The style might have been fresher in 1966 than it is now, but Wake Up and Kill primarily attempts to go for a more realistic and dramatic tone than what I expected going into a film with this title. The issue with this is that for a 2 hour film (this is the Italian cut, although I’ll touch base on that in a second) Wake Up and Kill has trouble keeping its focus. The first third runs like a fast forward romantic lead in with some Bonnie & Clyde elements – too fast for it to be as effective as it needs to be – and the last third seemingly forgets the love angle almost entirely to focus on the crime chase as Lutring attempts his biggest score yet while dodging two countries worth of cops. Neither act is bad, but it doesn’t necessarily fit together and flow like it could have. This is only made more complicated by the rather epic game of musical chairs that the movie plays with a slew of secondary characters that don’t make much of an impact as the plot swiftly moves onto the next scene to get all of the plot into the film.

However, the saving grace of Wake Up and Kill is the above mentioned performances and direction of the film.  Lizzani knows how to create an admirable amount of tension with very little, which is highlighted in two very slick car/foot chase sequences like a very frantic piece to end the film, and the onscreen chemistry between Hoffmann and Gastoni cannot be understated. Despite some odd writing shifts of tone for the characters, our two leads ably sell the notions and roller coaster emotions of their characters’ plights with grace and effective grandeur and carry the film through some of the more rocky transitions and awkward time shifts that the narrative throws their way. This is all tightly wrapped in the visual work of Lizzani who uses a shifting scheme of colors (watch how the film increasingly gets darker tones of colors until the finale with its dark streets and contrasting popping lights) which is cleaned up nicely in the new 2K restoration for this release. Truly, it’s the execution of these elements that lifts Wake Up and Kill into higher territory.

Note: The English cut of the film runs roughly a half hour shorter than the Italian one and both are available on this release. While some of the superfluous elements of the plotting are tightened in the edited version and the opening monologue does straight up tell the audience why Lutring does what he does (very Hollywood), it loses some of the nice build of characters for the main actors and feels a bit choppier in the later acts. It somewhat makes the two cuts an even match on which one is better in my opinion.

In the end though, Wake Up and Kill is still a worthy watch thanks to some solid performances and great visuals that take the gritty and grounded approach to heart. How it matches up with other Euro Crime films is something I can’t say with the certainty that I would like, but on its own it’s a fine film with solid dramatic beats to keep its rather rocky narrative from leading the entire film into tangents.

Written By Matt Reifschneider
Posted by DarkReif at 8:45 PM