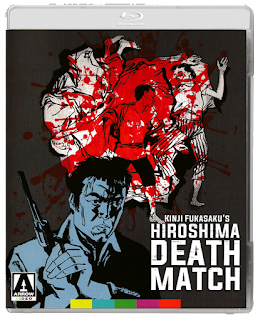 Director Kinji Fukasaku and writer Kazuo Kasahara really knocked it out of the park with their gritty and complex yakuza story in the first Battles Without Honor and Humanity, so when that one ended up being a commercial success it was only obvious that a second film would quickly follow. Hiroshima Death Match, also known as Battles Without Honor and Humanity: Hiroshima Death Match and Deadly Fight in Hiroshima, continues fairly faithfully in the style and tone that made the original film such a success. Any fans of the first one are definitely going to latch onto what this film has to offer. However, the writing this time around is a bit more focused and centered which is both a blessing and curse to differentiate the film from the previous one. And depending on your stance about the style, the film is either better or worse.

Yamanaka (Kinya Kitaoji) is freshly released from prison and finds himself without a home, money, food, or purpose. However, he’s quick to earn the ire of a local underboss (Sonny Chiba) after he makes a connection with the boss’ niece (Meiko Kaji). With the help of a fellow friend from prison (Bunta Sugawara), he starts to climb the ladders of the yakuza gangs in area, but his own emotional issues that arise from his forbidden romance with the boss’ niece start to send him over the deep end.

While Battles Without Honor and Humanity really crafted a paranoid tone and atmosphere of interchanging loyalties with its multitude of characters and scattered plotting, Hiroshima Death Match is a much more driven film that centers around one protagonist, the charming Kitaoji, and throws him into the world of this swirling violence and shifting morals. The film also attempts to solidify a stronger sense of main characters versus secondary characters as a love interest repeatedly shows up, allowing Meiko Kaiji to own the screen with her expansive presence, and establishing a clear set of villains led by a crotch scratching, sunglasses sporting role for the intense Chiba. This allows the film to really establish a more traditional feel that is a bit easier to consume for the viewer and strikes a separation in tone for itself from its predecessor.


However, Hiroshima Death Match doesn’t nearly establish the sense of unease and paranoia that the first film used so well. This makes the documentary like visual look, shaky cams and still frame voice over elements, feel a bit at odds with the rest of the film. It’s not nearly enough to call it a problem, but when compared to Battles, it does not flow nearly as well between the style and the substance as it might have. It’s still effective, but not nearly as effective as we have seen it work just one film previous.

The story on hand does work in a lot of effective ways though. Our protagonist is wholly relatable in his need for belonging and family which works doubly when partnered with the romantic sub plot. Just seeing him play with his lover’s little girl gives the film a sense of hope that it ably crushes as things begin to spiral out of control in the third act. Like the previous film, Hiroshima Death Match is not a ‘feel good movie’ and the way that events swirl and collide in the third act is just as emotionally effective as the writing in the first film. The combination of Kasahara’s writing and Fukasaku’s direction is impeccably balanced and efficient in its duality which makes Hiroshima Death Match further proof of how to make great dramatic cores work with thrilling style.

Needless to say, fans of the first Battles Without Honor and Humanity are going to immediately want to jump into Hiroshima Death Match. While the style has been tweaked and the tone shifted for the second film, the look and emotional effectiveness of the film is just as powerful. If it all possible, this film might be even more devastating and dark than the first, if simply because the protagonist and his hope for a bright future is justified and it’s heart breaking to watch the events that befall him.

If this is how the series is moving, I simply can’t wait to dive into the third film Proxy War.

Written By Matt Reifschneider
Posted by DarkReif at 6:21 AM