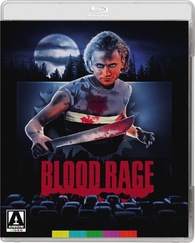 Often enough, we talk about the fine line between the ‘so bad it’s good’ and ‘so bad it’s bad’ here on Blood Brothers. It’s certainly an issue of taste overall and one that tends to only be debated in the realm of cult cinema. When it comes to slashers though, it’s easily one of the biggest elements that can be debated without end. In the case of Blood Rage, or any of the other hundred titles it’s known as like Slasher and Nightmare at Shadow Woods, it’s in our opinion that the film falls in the former rather than the latter. Don’t worry, I’m going to talk about the film in both regards, looking at it from a traditional filmmaking aspect and from the cult appreciation aspect too, but know that this is the kind of film that truly entertains more than anything – and will sacrifice most any element to do so.

Maddy (Lasser) has tried to be a great mother to her twin boys her whole life, but when Terry (Soper) kills a man at a drive in and pins it on his brother Todd (Soper) their life is torn apart. Ten years later, Todd just wants to set things right and escapes from his mental institution. This sets Terry on a path of destruction that will not leave any one safe.

When you have a slasher flick that focuses on the idea of twins (one killer, one not), a manic mother, and teenagers trying to hash out romantic interests – all set at Thanksgiving, mind you – it’s not that hard to imagine just how ridiculous this film can be. Or just how gimmicky some of the pieces of it can be too. So going into Blood Rage, it was fairly easy to see just why this film has garnered a serious cult following. After watching it, it certainly lives up to its silly premise and the fandom that has seemingly grown around it. With hilarious over acting, terrible one liners (“It’s not cranberry sauce, Artie.”), and a plot that involves some of the most illogical leaps of character choice, I was laughing throughout the entire film. Sure, none of these things normally would indicate a great film choice, but in the case of Blood Rage it is part of its 80s slasher charm and certainly the element that makes it the most entertaining. Often the film misses out on really developing some of the intriguing themes it could have ran with (including the dynamic of the brothers or the familial issues that seem to trigger Terry’s slaughterhouse tendencies) so that it has some emotional depth, but its adherence to simple slasher formulas pulls the film away from there and into more consumable and ‘date night movie’ territory.

Even outside of it’s B-grade charm of silly plot progressions and over the top set pieces, there is definitely some things that Blood Rage does remarkably well. The special effects are superb in that classic 80s slasher fashion with plenty of gore that works in artery spurting ways. Whether it’s a serving fork that’s jabbed in the jugular or a woman that is miraculously cut in twain, Blood Rage nails the effects. Partnered with this is another classic slasher element that the film gets damn near perfectly: the 80s synth score. It’s perfectly placed and the main theme of the film is one that the makers should have used more in the film it’s so awesomely done. This is wrapped together with a shocking visual style that director Grissmer utilizes to keep the film interesting despite its issues in the script. He uses space and intriguing angles to add fun to the mix that makes the film feel much more polished than it probably deserves to be.

As a bonus, this latest Blu Ray/DVD combo pack from Arrow Video features three (!) cuts of the film, not to mention a ton of interviews to really create a robust package set. While the cuts, edits, and choices between the versions might not fully interest most folks, for the more intense horror film fanatic this is something of a dream come true with how dense this package is. Not only that, but the ‘hard’ version of the film is completely remastered from the original negative and the execution is pretty impressive. Horror collectors take note, this is not a film to overlook as one of the better releases from Arrow Video this year stateside.

While Blood Rage might only appeal to horror aficionados with a taste for the campy world of 80s slashers due to its silly premise, off beat writing, and gore focused effects, the luscious release that Arrow Video accomplished with the film is enough to make most collectors want to dive into the world of cult horror cinema. If you’re looking for a great Thanksgiving themed horror flick to add to your collection or need a good laugh at how serious this film plays things, than look no further than this. Despite some oddities, this film just a huge recommendation for pure entertainment.