Battles Without Honor and Humanity (1973) 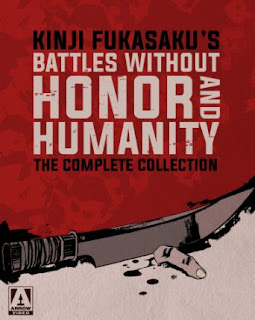 Also known as: The Yakuza Papers Vol. 1: Battles Without Honor and Humanity

Battles Without Honor and Humanity has to be one of the most requested movies for Blood Brothers to review. Not only was it repeatedly requested, but it was also a film highly suggested by fans and friends as one of the best cult films that Japan had to offer in their expansive catalog. With the release of the massive box set of all five Yakuza Papers films in one convenient place from Arrow Video, it was finally destined that we would not only be able to experience these captivating yakuza films, but they would be reviewed for our readers. The first of the series, the previously mentioned Battles Without Honor and Humanity, is just as unbelievably memorable and effective as it was hyped up to be. It’s a film that shies away from more traditional structures, but the magnetic performances, gritty visuals, and oddly satiric streaks make it one of the most visceral yakuza films I have ever seen. Worthy of the blessed treatment it has received in this latest Blu Ray edition.


When ex-soldier Shozo Hirono (Bunta Sugawara) finds himself in the dirty streets of Japan after the end of World War II, he's without a clue about what to do with his life.  So when some other young and ambitious men find that he has courage and a knack for shooting people, they form a faction of yakuza under the Yamamori family that they believe is destined for greatness. Shifting alliances and a specific knack to undercut one another though leaves Hirono and his brothers in a world without nearly as much loyalty or honor as they once imagined.

While there is certainly a portion of yakuza films that in some way or form glamorizes the lifestyle, whether the intent is there or not, don’t worry – Battles Without Honor and Humanity will essentially destroy and smother that notion. Director Kinji Fukasaku’s down and dirty look into the world of yakuza members in the years after World War II is based on a series of real life interviews about the often overlooked time period of strife in Japan. The outlook of even our protagonists in the film is pretty bleak even at its brightest as the character’s struggle to find a place in a world shattered where loyalty, honor, and promises are as fleeting as the various alliances they forge. The film also keeps the viewers on edge by introducing them to a plethora of characters (a ton just in the first opening sequence) and then not shying away from slaughtering them off, often at the most shocking of times. This allows Battles to be something of a torrential tornado of writing and characters that uses its off beat structure to keep an audience off center.

The tone of the film follows in this same style that Fukasaku utilizes for visuals. At times Battles almost resembles a documentary approach with tons of shaky cam for the tense set pieces and plenty of odd angles to keep the viewer jammed right into the action and paranoia of the film. This is partnered with a rotating use of characters and a sort of stream of consciousness style of plot development that covers a variety of years. Unlike many other films that attempt this style and structure (modern Michael Mann films), it works here to really keep this sense of confusion and paranoia that links the audience and characters. The performances are top notch material, even in many of the secondary throw away parts, and it really makes their sense of unease and emotional bursts feel legitimate. Not only is this film written to be somewhat offsetting, but all of the execution builds on that.

Despite all of the great performances from the cast and the perpetually leaping writing that allows it all to shine, perhaps the biggest surprise that Battles has to offer is its almost satirical sense of humor. When characters die they are mourned with a striking musical queue and their name and time of death flashes across the screen. When our “main” character goes to cut off his pinky in a show of regret for dishonoring a fellow yakuza, he is unsure of how it works and his finger ends up in a chicken coop. Perhaps the humor was not intentional in the film, but as far as I’m concerned it’s there in spades and it’s one of the best parts that Battles has to offer if you are willing to accept it for its dark tones.

All in all, it’s hard not to love Battles Without Honor and Humanity for its stark, realistic grit and grime and its abrasive structure and character flow. It’s expertly executed on damn near all levels and it still has time to throw a handful of twists and style elements to keep the audience on their toes. Truthfully, it’s not a film for everyone for one or all of these reasons, but for those looking for a strong dramatic thriller than it’s hard to go wrong with this film.

I’m ridiculously excited to see what else The Yakuza Papers’ series has to offer in the rest of this Arrow Video box set.