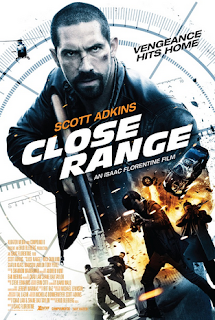 This year has seen its fair share of ups and downs in the direct to home video action market (perhaps bottoming out with Chain of Command), but it’s always a pleasure to partake in the latest Isaac Florentine/Scott Adkins action flick. This director and actor duo has produced some of the greatest low budget action films of the last decade – I would even argue that Ninja II: Shadow of the Tear deserves to be on any best action list, let alone one about low budget films – and their latest offering is no exception. Close Range is a no holds barred adrenaline rush of an action film that is sure to please most any fan looking for an entertaining and rather mindless film experience. It’s hardly one that will resonate with the test of time, but it’s effective at a lot of things and it makes for a great action flick for those looking for it.

Colt (Adkins) has been asked by his sister (Keats) to retrieve his niece (Lawlor) from the hands of some evil cartel thugs. However, after the rescue, things do not clear up like they should and he must protect his family from a full on siege of the family ranch…or die trying.

There is an obvious western nod to the general themes and style of Close Range. And by nod I mean full on punch to the ribs despite its modern twist on the topic. The film opens with a bit of silly exposition that explains what a ‘ronin’ is – which is a fairly standard cliché now in action flicks, the theme that is – and it’s overlaid with some acoustic country guitar and whistling. Yes, that’s right. Full on old school western style music. Luckily, most of the rest of the film is not nearly as heavy handed in the western angle as the opening credits sequence, but the comparisons are there, particularly when it gets into the third act which is done like an old school western ‘siege and protect’ sequence complete with a duel at the end. It has the rogue anti-hero as the lead, corrupt cops, and damsels in distress. All the western motifs are there so keep that in mind when going into Close Range.

Yet Close Range isn’t the kind of film that seems wholly smart enough to really expand on the western themes and style to modernize it a whole lot. Hell, the plot is about as predictable as the ABCs. Good guy pisses off bad guys, bad guys bring the heat to him. It’s predictable down to some of the cheesy dialogue. This simplification of plot does, however, allow the film to focus on what we all came here to watch – the action. While the Florentine/Adkins combo has proven to provide massive amounts of very strong martial arts action, Close Range instead goes a bit more into the realm of classic action set pieces. There are tons of shoot outs, a few car chases (including one where Adkins has to jump over an SUV), and the above mentioned quick draw duel at the end. This doesn’t stop the film from incorporating quite a bit of hand to hand combat though and truly this is where the film shines. The opening sequence features a one man siege on a cartel holding place where Adkins takes on handful of baddies with a belt knife (!) and the film consistently allows our hero to run out of bullets so he has to take on baddies with his fists. Florentine once again showcases that he might be the best action director in the industry right now with his ability to manipulate space and utilize strong choreography and dynamics to make up for his lack of budget. It certainly helps that Adkins is a born screen dynamo when it comes to these kinds of sequences.

Truthfully, Close Range is not the kind of film for everyone. It’s cheesy, fairly predictable and the acting ranges from mediocre to surprisingly fun. It’s not breaking any new ground when it comes to action. However, thanks to Adkins' impressive screen presence and the film’s non-stop action focused pacing, this film earns a lot of praise for being pure entertainment that maximizes its low budget chops into a ball of pure cranium rattling energy. It’s in this sense that the film comes with a very high recommendation from us. The dialogue or plot might not be rocket science, but the action sure makes you feel like you're blasting through space.