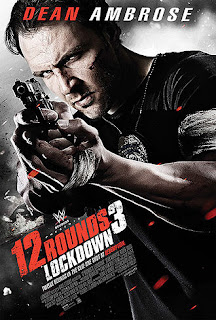 Shaw (Ambrose) is finally back from his mandatory leave of absence on the police force. After an incident that left him shot and his rookie partner dead, he feels ready to get back to work and make things right – even if his fellow officers blame him for another cop’s death. Unfortunately, on his first day back he discovers a group of corrupt officers are running a drug ring with police property. Once they find out that he has the evidence, they will do anything to stop him.

The first two 12 Rounds movies scrapped together plot lines based on the “madman makes people go through a ring of challenges” that was used in Die Hard with a Vengeance. However, this third entry completely abandons the model (thank God) and adopts a more traditional “man in the wrong place at the right time to stop baddies” plot. Yes, I understand that’s the essential core of the original Die Hard, but it simply works better for this film though as it can play its plot more straightforward and with a focused simplicity. None of this ‘clever’ bullshit that the other two films struggled to make work in any kind of logical manner. This film strips it down to the action basics and it works.

So why is it called 12 Rounds if the hero doesn’t have a dozen rounds of challenges to complete? 12 Rounds 3 takes a slight spin on the title and only gives him 12 bullets in his gun to be able to take down the group of corrupt cops that have locked down the police station and are out to kill him. It’s a type of ‘playing against the clock’ that works for the film in a gimmicky manner and has the audience counting his bullets as much as he is. Of course, the film tends to use some silly ideas to prevent him from firing his rounds like using a Taser to get a dead body to shoot its machine gun so he can make a get away, but it’s a lot of fun no matter how silly the premise might be.

Like many of the other WWE films, it’s the pro-wrestler that tends to be the weakest link in the film. Dean Ambrose, while not nearly as bad as some of the random wrestlers that WWE has shoehorned into their films, is not as charismatic as one would hope in the role. The film has a lot of fun smaller secondary roles, including an awesome villain performance for Roger Cross, but it lacks a bit of the screen presence needed to really care it from its lead. He’s not bad exactly, but he’s not good either.

Luckily, the film is carried a bit by some solid action set pieces. The simplicity of the plot doesn’t allow for a whole lot of creativity in the action, but when it pops up it’s fun. There’s plenty of fist fights and chases (you know, to conserve his 12 rounds) – including a fun car chase piece in the parking garage of the police station – and there is enough gun battles to keep things explosive for action fanatics. Director Stephen Reynolds is a modern director, who uses a bit too much shaky cam for my tastes, but he has a knack for keeping things feeling fresh and using the setting and edits for the film’s benefit when it comes to the action. Nothing is all that original or flashy, but for the rather grounded style of the film it’s effective.

12 Rounds 3: Lockdown might not be one of the most memorable action movies of the year, but it is certainly a step up in solidity for WWE studios when it comes to their direct to home video releases. Its biggest issue remains its star, who struggles to carry the film, but the rest of it is a fun B-action time with tons of silly plot elements and a great film villain. In the end though, it still gets a Blood Brothers recommendation for action fans!

Written By Matt Reifschneider
Posted by DarkReif at 1:26 PM