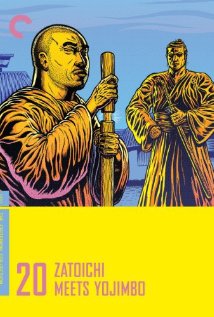 After taking a fairly decent break during my Zatoichi binge, I went back and watched Yojimbo and Sanjuro in prep for this film. Both franchises, despite significant differences in length, expertly hold their own as entertaining and well executed films. Could Zatoichi Meets Yojimbo possibly contain the epic screen devouring abilities of both of these characters and their respective actors? Quite simply, the answer is yes. Quite ridiculously, the answer is holy shit yes. Zatoichi Meets Yojimbo is a film that not only ably blends the style of two franchises, but it makes note to actually surround our protagonists with a plot that is worthy of having both characters meet. Fortunately, the film also doesn’t fall prey to the generic ‘versus’ elements of bringing two iconic characters together…which only makes it better.

Zatoichi (Shintaro Katsu) needs the comfort of his old home after a rough time on his endless wandering adventures. When he arrives though, he finds the town is a shadow of its former glory and torn apart by a yakuza family feud. He also finds that one side has hired a shifty swordsman as a bodyguard for their boss, a nameless man (Toshiro Mifune) who only seems to be out for himself…and stands in the way of Zatoichi righting the wrongs of a town lead down the wrong path.

It probably wasn’t all that hard to figure out a way to inject the nameless swordsman, whether or not he is the same character from Yojimbo which I have seen debated online, into the Zatoichi franchise. Zatoichi Meets Yojimbo still adheres fairly strictly to the formula established by the decade long series albeit with stronger writing and some top notch performances for the two protagonists. For this twentieth film, the plot remains prescribed to include warring yakuza factions, innocents caught in the cross fire, a rogue swordsman, and the beautiful woman caught in a world where she never really wanted to be. These are all things that can, and will, be found in other Zatoichi films and they make their standard appearance here…so fans are certain to find their footing quite quickly in the feature. It just so happens that our nameless swordsman, this time played with dirty anti-hero charm by Mifune, is the rogue swordsman which adds plenty of new depth to a formulaic character role.

Outside of its paint-by-numbers structures and build, the execution of Zatoichi Meets Yojimbo is phenomenal. On screen, the two stars of the film are captivating to watch on their own, but each time they meet – and lovingly refer to one another as monster and beast – it’s like watching lightning in a bottle. Katsu remains as endearing as ever as our titular blind swordsman who adds just enough humor to make his more dramatic pieces punch and Mifune continues to baffle as his anti-hero seemingly wavers in his focus and convictions with such ferocity that he plays the perfect counter-balance to Zatoichi’s character. Director Okamoto seemingly knows how well the two work together and builds a film around the two character tones that it becomes a wicked game of chess with one another.  It works so well that the plot, as formulaic as it is, plays around these two characters who move the secondary characters around themselves as pieces on the board by the second half. It’s a smart move by the writers and director to continually shift the nameless swordsman and Zatoichi roles back and forth within the plot and it makes the film a sort of roller coaster ride of twists and turns. The audience ends up caring for most of the main cast (including some strong secondary characters like a imprisoned man who becomes a sort of side kick to Zatoichi) and it makes the film impactful visually, emotionally, and in concept throughout.

It must also be noted though, for the more action oriented fan base, that Zatoichi Meets Yojimbo is rather sparse on the action set pieces. There is enough to keep the two hour film moving at a brisk pace, but it’s not like our two protagonists repeatedly battle one another. There are a few traps set in place and a solid amount of henchmen find themselves at the sharp end of a sword by the finale, but the film instead plays out the characters are gravitational personalities that battle instead with wits rather than letting them clash swords. By the time the two finally do end up dueling it out in the final act, Zatoichi Meets Yojimbo pulls some pretty fun twists to make it a more philosophy driven clash then one where it’s an extensive and fully choreographed match.

In the end, the combined film devouring abilities of Katsu and Mifune partnered with their iconic on screen personalities and a tension filled conspiracy plot make Zatoichi Meets Yojimbo one of the best of both franchises…and being one of the best in the long running Zatoichi series is one hell of a statement. Fans are going relish in the moments that the two have on screen together, but sincerely appreciate that the film makers didn’t just smash the two characters together in a lackluster film affair. To truly delight in what the film has to offer, a solid knowledge of the characters as characters does need to be understood so it’s not necessarily a film for those new to either actors…but for fans it’s a true cinematic achievement.