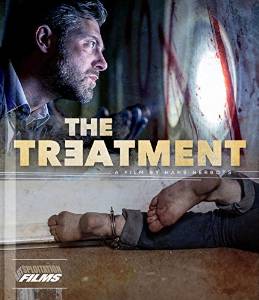 There is a kind of film that exists which impresses with its thoughtful writing, crisp execution, and impactful themes, but remains a film that’s hard to call enjoyable. This is exactly where The Treatment falls as a film. It’s a gripping, intense, and often hard to handle thriller that touches on some very disturbing subject matter within its plot. It’s one of those films that as the final credits rolled, I kept replaying the events of the film in my head over and over as it had such a lingering effect on me. It also speaks volumes to the strong execution that this film utilizes to tell its dire tale…one that’s certain to be remembered as a strong contender for best thriller of the year.

Nick (Rampelberg) is a great detective and one whose dedication to sealing the deal is powered by the disappearance of his brother at a very young age. When a family is discovered beaten and starved with their little boy missing, he will stop at nothing to bring the perpetrator to justice…even when the strings he pulls begin to unravel a massive and decade long series of events that might even link to his own past.

In any great thriller, the plot is never as simple as it seems—but with The Treatment, that’s a massive understatement. It’s not that this Belgian film is out to throw in red herrings left and right just for the sake of complicating matters nor are the twists going to be flying in from left field, but the way that The Treatment unfolds is like a blossoming flower. Instead of beautiful petals and fragrance though, it’s a decent into the mind and underbelly of a criminal perversion that is likely to horrify the viewer. As the audience rides along with Nick, played with a massive screen presence and intensity by Geert Van Rampelberg, the film continually takes its atmospheric tension and breathless series of events to the next level with turn after twist after twist after turn. While this film sits firmly in the thriller genre and even more likely as a police procedural at times, it’s ten times more horrifying than 95% of horror films likely to be released this year and it’s the gritty realism that makes it so impactful. It might be cliché to refer to this kind of intense film as a ‘white-knuckle ride,’ but there might not be a better description for the experience that The Treatment is.


I’m specifically keeping many of the details about the plot vague here as The Treatment truly is a film to experience. Director Hans Herbots navigates the subtle narrative and extreme visual elements of the film with such artful ease that often I was consumed by the way the film was playing out and I forgot that I was even watching a film. Whether it’s the numerous phenomenal performances from an astounding cast (early on in the film we see the mother of the family that was held captive and her brief screen time was brilliant to watch, and these kinds of minor yet stand-out performances litter the entire film) and an almost relentless pacing that prevents the audience from relaxing, The Treatment is not a film for the weak of heart. If you took what Prisoners did and fold in even a more intense and horrifying plot then you are just starting to understand what this film delivers. It’s a film that is executed in the highest of caliber and it makes every bit pay off.

Let this review be a warning as much as it is a praise of the film. The Treatment is the kind of cinema that’s going to leave a mark on its audience. The execution is astonishing, from the acting to the cinematography, and the way that Herbots handles the thoughtful and consistently writhing plot truly complements the deep atmosphere and horrific circumstances that are being unraveled onscreen.  This is not the kind of thriller than one watches “for fun,” but one that one watches to truly experience a story…no matter how dark and deep the hole it digs. I can’t say that I enjoyed my time with The Treatment, but the film gets a resounding recommendation for me as one of the most intense film experiences you will have this year.