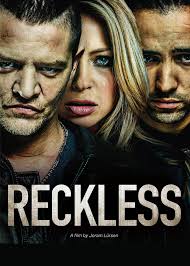 Oh yes, the dreaded expectations of a film. High expectations can easily kill a film before it’s even out and low expectations can make even the most dire of Z-grade exploitation flicks fun and pleasantly surprising. When it comes to remakes, expectations can be the utmost efficient assassins. Particularly when it’s a remake of a highly praised film. No matter how good a remake is, it can simply fall short to its predecessor and stumble out of the gate. This is where Reckless comes into play. Like many great films that simply couldn’t touch its originator (Let Me In to the superior Let the Right One In is a prime example that comes to mind), Reckless is too much like The Disappearance of Alice Creed to truly stand on its own and it never finds its own voice…despite some strong executions along the way.

Vic (Gernandt) and Rico (Kenzari) have it planned perfectly. It’s the perfect ransom. The daughter (Chronis) of a wealthy businessman. His only child. It’s quite frankly, the perfect crime that will leave them $4 million dollars richer. That is, if each member of this crime remains true to the cause and doesn’t execute their own agenda in the meantime.

The Disappearance of Alice Creed is a phenomenal thriller. It’s too bad that it remained something of a cult gem because it’s one of the most intense, thoughtful, and dynamic low budget crime flicks of the last decade. It also means that, for most of the film watching community that missed out, Reckless is going to be a fresh and shocking film instead of the frame-for-frame remake that played for me. If you haven’t seen Alice Creed, I highly suggest taking a gander as it’s technically the superior film, but that doesn’t stop Reckless from gunning for gold at least. An admirable trait for a film that remains completely and utterly unnecessary as it adds nothing new to what Alice Creed did as a film.


So let’s throw out the comparisons between the two films for now and focus on what Reckless does right: execution. The plot itself starts off very straightforward and with only three characters to tell its story, it remains a very tight and quick paced flick. The dialogue is littered with subtle character building, the twists that arise in the second and third acts are tense, and the resulting finale stamps the narrative with some very artistic force. What seems to start off as a simple hostage thriller quickly takes some classic tropes and ignites them with well implemented finesse. The twists are not brain busters, but the characters are so real and the situation is so well developed that it’s hard not to get sucked into the story and just run with it as it takes off. Even though most of the characters are assholes to some degree, there is a connection with the audience and it’s an edge of your seat ride all the way through.

At times Reckless unfolds like a theatrical piece with limited settings, limited action, and limited budget. Don’t mistake this as calling the film simple or boring. It’s neither. It just means that the actors and director (not to mention editing) have to carry the film. All three of the principle parties on screen deliver strong performances with enough conviction and emotion that when the plot calls for distrust and paranoia they don’t have to overact to sell it. They blend in with the tense thriller atmosphere so well that they probably made the director’s job easy to sell the entire concept even when it gets a bit ridiculous towards the end. Simply said, Reckless is just a well-executed thriller.

Truly, the only real thing that I can knock about Reckless is that I saw the exact same film, years ago and done just slightly better. It’s the kind of thriller that requires a fresh sense of dedication to the characters and plot to ride along, but when all of the plot points are exactly the same it zaps a ton of the fun and intensity out of the film. A big part of me desperately wanted the film to pull a massive 180 in the final act and deliver something new, but Reckless sticks to the same blueprint of Alice Creed all the way through…and it’s hard not to find that disappointing on some level.

For those who haven’t seen The Disappearance of Alice Creed, you are likely to find a massively enjoyable and intense thriller in Reckless that utilizes its simplicity to massive effect. For those who have, you might as well skip out on this one and simply rewatch the slightly superior original film as Reckless seems desperately unnecessary.