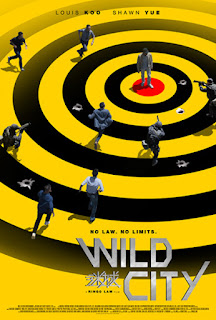 While Ringo Lam’s career seemed to end rather suddenly with a series of solid, but hardly exceptional Jean-Claude Van Damme movies in Hollywood, there was a massive sigh of relief when it was announced he would be directing a new action thriller back in Hong Kong. It’s not that I dislike his time in Hollywood, in fact I quite enjoy those films as entertainment, but this is where Ringo Lam belongs. So his latest film Wild City came with some lofty expectations. After almost a decade away from the director’s chair (over a decade if you don’t count his segment in Triangle) Wild City is a welcome return to form for the acclaimed action director and one that is certain to please those like myself that have anxiously awaited his return.

When an ex-cop (Louis Koo) and his brother (Shawn Yue) help out a drunken woman (Tong Liya) one night, they don’t realize the shit storm that they just walked into. On the run from a set of high powered criminals, she is the key to bringing down an entire crime syndicate…but now they have the cops, gangs, and a Tawainese hit squad on their trail. Can they turn the tables and come out ahead in a wild city?

Initial trailers for Wild City made it seem more of a standard modern Hong Kong action flick. While the film certainly has its fair share of shoot outs, car wrecks, and street fights, it’s only one aspect to a film that is far more diverse. Wild City plays out more like a massive chase film. Sometimes it’s the good guys on the run and sometimes it’s the bad guys, but it seems like the film moves at a rapid pace throughout, only stopping to add in some thoughtful character work for our three protagonists (and occasionally for the antagonists). In many ways, Wild City is more akin to the pacing and structure of the Bourne movies than it is to classic Ringo Lam like City on Fire or Twin Dragons. It’s this kind of tone that really brings the style of Lam into a modern stage. Partnered with some beautiful cinematography (seeing the neon lights of Hong Kong at night is always a great stage for this kind of film), the film is not going to be quite the throwback film many might be expecting. It's much more than that.

Yet, it’s very easy to see the 80s style Hong Kong flick in the center of Wild City too. As mentioned before, the film bursts out in some fun action set pieces, including a high tension finale with car wrecks, explosions, and more, and Ringo Lam is the guy to handle this kind of action and suspense to maximize the explosive thriller elements. There is even a bit of heroic bloodshed to be found in the manner that the film up-plays the character interactions. Louis Koo and Shawn Yue have impeccable chemistry on screen (as does Tong Liya) and the film even adds some nice back story for the films many villains – including a very familial tone for the Taiwanese hitmen that makes the eventual clash of heroes and villains more impactful. Occasionally Wild City gets the plot muddled as it focuses on the pacing, tension, and characters instead of fully fleshing out the twisty plot that has chasers and chasees switching sides and the obvious police subplots being woven in, but give me solid characters (and actors to portray them) any day over a crisp flawless script.

While the film is not perfect (once again some questionable CGI rears its ugly head in the third act – like it seems to do in all current Hong Kong films), it IS the return to form for Ringo Lam that we all wanted. It’s not a throwback film that many might expect, but it’s an impressively executed blend of the past and present of Hong Kong action thrillers. Exceptional performances, high octane chases, thrilling action set pieces, and the grounded talents of a director come back to reclaim one of the thrones of Hong Kong cinema, Wild City is an thoughtfully developed blast. All hail the return of Ringo Lam!