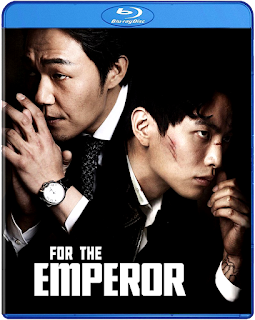 “I need some popcorn. So many plot twists.”

At each turn, it seems that the now infamously high quality of the South Korean thriller is adding a new twist or new influence to spice things up. Earlier this year I wrote about the strange genre bending of The Divine Move, but in the gangster film For the Emperor one is going to see a bit more cohesive – if not more excessive – film that blends various gangster film styles into one. At its core, the film is most certainly a South Korean thriller with plenty of subtle acting and sharp writing to go around. In its execution, For the Emperor is slightly more extreme as it blends in a bit of 60s/70s Japanese new action and 80s Hong Kong excess into the mix. The results are pretty impressive. For the Emperor is a vicious ride filled with subtle striking performances and bursts of side-stabbing violence. Genre fans will be pleased.

Lee Hwan (Lee Min-ki) had a promising career in baseball, but fate was not kind to him and he quickly found himself at the end of his rope, broke and out of a job when a match fixing scandal came to light. While awaiting for a comeback, he finds himself working for a rather well suited loan shark (Park Sung-woong) as an enforcer. His boss takes him under his wing and he quickly rises through the ranks. However, his greed and power hunger make him suspicious of his boss and a series of events suddenly make them bitter rivals.

If you take the gangster aspects of the Korean thriller New World, place them on top of a Scarface style plot, and then slather it in the violent upheaval of the A Better Tomorrow films, then you are beginning to understand just how For the Emperor plays out. Never does the film feel like a knock off of any of these films, but it simply samples elements from each to build a modern tale of power corruption and the rise and fall of a young man with big ambitions. So needless to say, the film treads some pretty dark material. Plotting wise, For the Emperor plays things fairly straight for the first two acts. Outside of a bit of time jumping, it works its way along a subdued performance of Lee Min-ki as our protagonist – not necessarily a hero as he tends to pursue most of the wrong personality traits to fit that description – and we are introduced to the world of big business gangsters. As a side note, Lee Hwan is not the most upstanding of protagonists so don’t expect some sort of big turn of redeeming qualities. You’re not going to get them. The film also utilizes some generic secondary characters along the way, including a fiery romantic lead that tends to be more of an excuse for nudity than a lot of character building, but it’s the unique way that many of these characters interact that works. Stellar performances are in abundance here and it makes every scene, whether it might have worked or not, fascinating to watch within the context of the film.

However, when it comes to the third act, the film gets a bit muddier. As the opening line suggests, in an odd almost prophetic way in the film, there is a series of rapid fire twists to the plot that erupt out of the progressions. Most work, thanks to some brilliant direction and acting, but it loses a lot of steam in the meantime. It’s not that most of them don’t make sense in that sort of manner, but it takes away from of the sleek and deadly efficient storytelling that is presented up until that point. It was expected there would be at least one solid twist to the proceedings, but not the handful that show up.

As bonus points to cover for the occasional flaws in the darker presentation of characters or the overwhelming third act, For the Emperor has some striking action set pieces. The film might retain some of the darker Hong Kong excess of violence (there is definitely some bloodshed), but there is a remarkable art form to how it’s presented – which is where some of the parallels to 60s Japanese ‘new action’ films come into play. In particular, the opening sequence features a raid on a complex with a group of killers armed with knives that is lit only by the flashlights they carry. It carries a strong resemblance to a similar chaotic fight sequence in the Japanese yakuza film Retaliation that I reviewed not too long ago. It’s this sense of art to the brutality of the film’s violence that carries some weight and impresses so much.

For the Emperor is not quite a perfect film. It’s a bit darker and more genre classified to be the true dramatic force that was New World, but those same excessive elements are handled with notable artistic merit by director Park Sang-jun. The rather off beat script is carried by his vision and the powerhouse performances of the entire cast maks up for a lot of the flaws that bubble to the surface as the story plays out. While some more discerning South Korean cinephiles might find the film a bit underpar compared to the many classic thrillers that have found their way here, but for the genre fans it’s a welcome bleak and vicious twist on the standard.