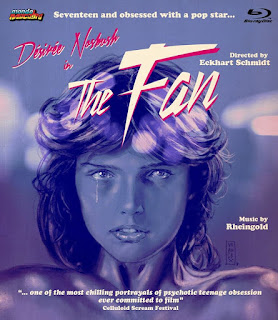 Der Fan (or Trance, or simply translated, The Fan) is the dark and disturbing tale of a young teen obsessed with a pop-star named R. By obsessed, I only mean that she very casually goes to the post office every single day of her young life looking for the the letter she wrote (multiple letters actually) to at some point be returned in full by the mysterious one-lettered love. That doesn't sound so bad, but wait until you watch it. She goes from being this nice little girl, to a very, very warped young lady. There should be emphasis on her age, because in the film (and in real life, which is the uncomfortable part) the leading actress is only 16 years of age. Makes for quite the spin on just how excellent her performance is.

This is a tricky film, by way of not wanting to spoil anything,  as it is hard to delve almost at all into the film for almost anything can ruin it. The film is actually quite simple in the way it is told and executed, and there is certainly a fair amount of great shots in the film. Now, I am sidetracking into the technical aspects of everything. Damn. Uh, well, the film is actually, as I mentioned before, a young fan girl of said pop-star, slowly diving into the madness of her own mental illness. Her fandom has far beyond gone into the point of unhealthy, and the whole weight of the film is brought to us by seeing this girl slowly spiral into another state of existence. Her heart beats only for R, and she gives no damn who stands between her and her lover. The gap is slowly closing in.

I am having a hard time writing a review for this. It's not the greatest film made of its kind, and in fact, Audition (which I was reminded of throughout this movie) I think is a much better, albeit more bizarre and extreme, movie in the same vein as Der Fan. Some of my problems with the film exist within the editing. On more than one occasion there was an odd cut or fade, and the scene was just over. Some weird character moments too, particularly in the beginning, which I found puzzling. There is a scene where the lead, her name is Simone, which I figured I should mention at some point, is watching R on the television with her parents, and her father can't put up with it anymore and changes the channel. They then proceed to start physically fighting, to a degree, and the dad awkwardly walks her down the hall, and the scene is over. Just like that. I get taken aback by how awkwardly slapped together a few moments are.

One more beef to settle with the film, is... walking on thin ice here (no spoilers, I promise)... during the one scene in the movie where things get bloody, there is almost no blood, at all. It really took me out of that scene despite the knockout performance. I am not one looking for the gory tidbits in films, but when it needs to be there, and in this case it clearly should, it just isn't and it really softens the impact the scene could've had.

This all being said, see the film. It's final act is worth the price of admission, and Desiree Nosbusch gives an absolutely phenomenal performance as Simone. Cue the weird, but badass synth! I give Der Fan a much deserved and respected 4/5. I do have problems with the film, and there is a lot more to dive into than I let on, but damn it, this is one to go into blind.