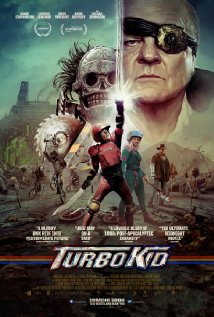 Turbo Kid is a film with so much hype that genre film fans have been foaming at the mouth just at the mention of it. But for me this is much more than that. Francois Simard, Anouk Whissell and Yoan-Karl Whissell, the trio behind RKSS Films, have been at it for years before getting the big break that they truly deserve. The trio’s love affair with the Fantasia Film Festival and SPASM has seen their classic blood and cheese fests such as Demonitron: The 6th Dimension and Ninja Eliminator. These were filmmakers with an undying passion and a dream to make a film that only they could be crazy enough to make. Ever since the 2004 short Le Bagman, which French Canadians are still watching to this day (I have it on right now while writing this!), RKSS’ persistence has landed them their first big budget film and let this one not be their last! The New Zealand/Canadian co-production features actors from both countries and then Michael Ironside to add some veteran American talent in the mix. Our lead Munro Chambers, best known for the years he has been in Degrassi, is our underdog with a dream of his own. Turbo Kid isn’t just a cinematic genre masterpiece, it’s the product of many years of playing with fake blood, guts, and learning along the way.

Turbo Kid follows our titular character (who goes through the entire film nameless) in a vast wasteland where water is scarce and is the most desired resource after many years of drought. Humanity is long gone and complete garbage is considered to be gold. Munro’s character lives alone near a playground and survives as a scavenger but his heart is still good. Reading any Turbo Rider comics that he can get his hands on, our lead is then introduced to Apple (played by Laurence LeBoeuf) a strangely happy girl simply looking for a friend. Though wary at first, the two become inseparable until Zeus’ (played by Michael Ironside) goons go looking for more victims. On the side we have Frederic (played by New Zealand actor Aaron Jeffrey) who just lost his brother to Zeus’ vicious “Pool Party” and now the villain has set his goal upon eliminating Frederic and anyone who gets in his way as the wasteland’s water lord. You wouldn’t want to mess with Zeus’ right hand man Skeletron (played by Edwin Wright) either.


While I can’t speak for Chambers with not having seen any of his previous work, he seems to be quite comfortable with his role as it seems to have been made exactly for him. Chambers isn’t just playing Turbo Kid. He is Turbo Kid. When he gets the chance to be in the shoes of his fictional idol Turbo Rider, he unwittingly embraces it to live out a dream in a place where there is none left. Ironside plays the perfect villain but hey, we all know this isn’t the first time. With films such as Visiting Hours and Cronenberg’s Scanners to name a few under his belt, we all clearly know that Ironside can chew up the scenery and this is no exception. The film is wonderfully dressed right down from the set to the costumes such as the primitive club to the gnarly weapons and headgear. Unlike the Mad Max franchise there are no vehicles left so anyone looking for transportation is going to have to invest in a rundown bicycle. Just because there aren’t many people left, doesn’t mean anyone is safe in this post apocalyptic world either. This is a film that proudly sports a body count with our main characters held responsible whether it’s in Zeus' “Pool Party” or battles held out in the dreaded wasteland. Of course, it wouldn’t be a RKSS production without its share of over the top cartoonish and gory violence or its touches of comedy throughout the film. It’s actually quite surprising to say the least of the various collaborations from the Canadian government and other affiliates that all listed at the beginning of the film so fast, it wowed me that so many companies could invest in just one film! In the end it is clear that this is the love child of the RKSS trio more than anything else and these are all pros in the business, including executive producer Jason Eisener (Treevenge, Hobo with a Shotgun, ABCs of Death) who decided to put faith into them.


What else could I say about Turbo Kid really? Francois Simard, Anouk Whissell and Yoan-Karl Whissell maybe new in town in the bigger budget film industry but they have been around for a very long time. The five minute standing ovation at Fanatasia which left the directors in tears was the moment that they realized that they have come full circle. If there is a lesson to learn from this is that dreams don’t just happen. They come from years of hard work, whether it is just a few to over a decade. For this trio, the dream probably never ends because there is no stopping here. They’re only getting started.

Elise Holmes is not your average writer. Dedicated to her Evil Dead fan site The Deadite Slayer, she is doing Fantasia Fest coverage this year for Blood Brothers! Check out her site HERE!
Posted by DarkReif
Email ThisBlogThis!Share to TwitterShare to FacebookShare to Pinterest
Labels: Action / Adventure, Comedy, Fantasia 2015, Post Apocalyptic, Science Fiction