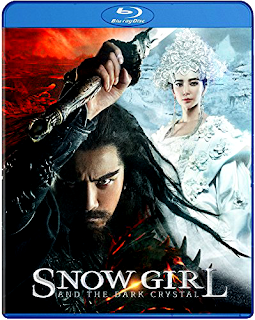 In the effort of being upfront, the intense focus on rivaling Hollywood in spectacle by some of the bigger films coming out of Hong Kong has been underwhelming. In the case of Snow Girl and the Dark Crystal, the blend of classic Chinese story and CGI slathered spectacle heavily caters to the latter and forgets to focus on the former leaving a film that has potential, but rarely lives up to it. Even fans of epic fantasy films are going to find it a bit hard to digest. It’s not for lack of effort, but Snow Girl just doesn’t have enough time or budget to get out what it needs to be a great film.

Zhong Kui (Chen Kun) is a legend in the local city. He’s a demon slayer trained by a god in heaven to keep the Earth safe from the demon hordes of hell below. When a mysterious woman named Snow Girl (Li Bingbing) shows up after he steals the powerful Dark Crystal from hell, he begins to remember a past life that will set him on a course to shake the vary foundations of the three realms and uncover a conspiracy to annihilate mankind for good.

Snow Girl and the Dark Crystal (which is really titled Zhong Kui: Snow Girl and the Dark Crystal according to its title sequence) is a film that, like it’s narrative and lead character Zhong Kui, is caught in multiple realms of reality. On one hand, the film is an epic fantasy film hinged on a romantic character struggle with ties to classic wuxia films and stories with a slew of characters and tons of intrigue built into the narrative. On the other hand, the film so desperately wants to obtain an epic Lord of the Rings feeling that it will sacrifice everything to be on the cutting edge of being grand. This leads to some lofty problems of ‘too much shit in one bucket’ for the film to properly handle itself.

This culminates to a battle of visual storytelling versus script in the film. Directors Peter Pau and Zhao Tianyu, who handle the cinematography of this film like a bad ass, obviously are very visual storytellers. They throw everything they have into creating a visceral experience for the audience. The background CGI is phenomenal (even if the CGI characters within those are exponentially more hit and miss – including Zhong Kui’s demon form which never feels as smooth or effective as it could have) and the directors have a knack for great camera work with the landscapes. Even the visual effects riddled battle sequences are something pretty to look at with enough sparkles, bits of debris, and motion to obtain the ‘epic’ look that the film desperately attempts to achieve. The highlight of such is a fun underwater demon battle that, outside of the silly Zhong Kui demon form, looks and feels like a Hollywood production. A huge step considering some of the terrible CGI that has riddled the last few years of Chinese big budget productions.

The plot itself harkens backs to the core of a lot of great Chinese storytelling. Gods and romance, demons and morals, action and emotion. The story is so massive though that often many of the elements are thrown out there and then have to be sacrificed for its attempts at being a blockbuster. The romantic subplot is often overlooked for the visuals as actors Chen Kun and Li Bingbing are only in a handful of scenes together as real actors and the rest is in their CGI demon forms which takes a lot of oompf out of the emotions. Even some of the more intriguing plot twists, like finding out just who is the real villain of the film, fall flat as there wasn’t quite enough time to develop the character relationships that didn’t serve the pacing or the visual grandeur. Too much of the interactions and the character growth is thrown out for the sake of those big epic visuals and massive CGI monster battle sequences that the depth needed to actually hold up those same elements is forgotten. Subsequently, Snow Girl and the Dark Crystal sinks like a rock as the audience desperately tries to grab onto anything worth taking away from the film when it comes to the story.

Granted, the intent of this film was obviously two things: visual opulence and the kick off of a possible franchise. In those things Snow Girl and the Dark Crystal does succeed. The cinematography is stunning and the plot builds some great threads that it can’t actually use in this film, but would be perfect for sequels. However, as a stand-alone film experience Snow Girl fails to resonate with its classic themes, characters, and emotional relevance. Which are all keys to raising this film above and beyond its own execution. In the end, it’s a very pretty film with all kinds of deserving praise for shots, costuming, and design and yet…it remains a hollow cinema experience that won’t be remembered in the years to come. Balance is everything. This film sorely lacks it.