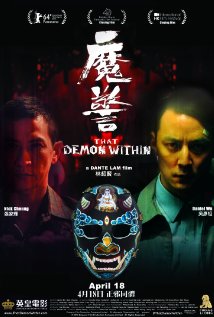 Dante Lam has never been my favorite of the modern Hong Kong directors that has found international appeal for various reasons. The lacking US releases of his last two films seemed to indicate that perhaps there wasn’t quite enough strength and/or appeal to them so I didn't really hunt them out. I kept my opinion open though and when I discovered That Demon Within was available to watch on Amazon Prime (even though it has yet to get a full US release on home video), I was on it in an instant. As the closing credits roll though, it’s easy to understand why the thriller garnered mixed reviews and no one seems to be clamoring for a wider release. The film is one that sports a spectacular and edgy concept, but lacks the flow and structure to sell its tale of paranoia, revenge, and moral stance. It’s a film that could have been one of Lam’s best in concept, but falls considerably short.

When a small time police officer (Daniel Wu) attempts to do the right thing by donating blood to a severely injured man, he unknowingly keeps a criminal mastermind (Nick Cheung) alive. When this “Demon King” escapes police custody, our young hero will do anything to take down the man he saved and the criminal organization he runs. Even if it means crossing the line.

From reading the synopsis, it would seem fairly obvious that That Demon Within would be an average Hong Kong action thriller and one perfectly suited for the stylistic mainstream abilities of Dante Lam. However, the film never feels content with playing the story as straightforward as it might have and instead injects a massive amount of atmosphere and plenty of psychological horror elements into the mix. As it would happen, the lead character has something of a troubled past and when he donates blood into a man that has been terrorizing Hong Kong, he snaps. Violent tendencies arise and his personality begins to splinter. This kind of character study allows Daniel Wu to get in a strong performance, including a spectacular scene where he breaks down in a hospital, but the film doesn’t quite know how to blend the thriller plot with the character study that this film wants to be. The structure and flow are haphazard thanks to the artistic approach that Lam and company take, inserting blips of flashbacks and back story to the lead character’s past throughout in various ways, and it simply doesn’t maneuver the genres like it might have. There are these bright moments of inspiration throughout the film, including the previously mentioned hospital scene or the final standoff in the apartment before the big finale, but it's surrounded in a film that simply lacks the focus to pull it off.


Dante Lam isn’t a director that’s really suited for this kind of film either. His stylish action set pieces, think Michael Bay inspired, don’t quite fit either and come off a cheesy in the film. There are a ton of reoccurring symbolic elements to be found, including tons of fire and the demon masks that the villains wear, but those get lost in a plethora of characters and plot progressions for the film. Since it is still a thriller, That Demon Within is obligated to give us a twisty tale where Daniel Wu’s character has to play off the gang members against each other and there is, of course, police corruption involved. So as the film is trying to stuff these portions into the plot, it loses its focus on the character study and all of the artistic pieces fall flat. Let’s not forget that because it’s a thriller it also has to have a few action set pieces and while those work for the most part, the finale car wreck would have been prime material if it wasn’t for the questionable CGI, it again pulls away from the core of what would have made this film tick: the character arc.

That Demon Within represents what coulda, shoulda, woulda been Dante Lam’s best film to date. Unfortunately, it so desperately wants to balance the artistic and dark psychological aspects with a traditional Hong Kong thriller that it never finds the path to navigate it all and eventually collapses under its own weight. For some it’s still going to resonate with its strong atmosphere and performances, but for others, like myself, it’s just going to feel like a lot of half baked ideas.