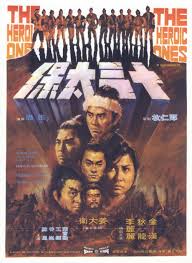 As a Chang Cheh fan, I’ve become accustomed to his style of direction and the various nuances of his films. One is apt to find fairly gory violence, lots of bigger than life characters, and a penchant to kill off anyone he thinks will make the greatest impact on the plot. However, I was not prepared for the roller coaster ride of plot twists, character shifts, and deaths that The Heroic Ones had in store. Right away, the film guns it for an epic war-time approach, but it’s the endless twists and turns of the plot that make this movie exhausting…in all of the best ways.

A warlord (Ku Feng) is using his thirteen adopted sons as generals in his massive army. Under the youthful spirit and effective leadership of the thirteenth son (David Chiang) these brothers in arms are a force of be reckoned with on the battlefield, but when an assassination attempt is botched by the brothers, they will find themselves at odds with another warlord and each other—a circumstance that may end up costing them their lives.

Under the careful and energetic direction of Chang Cheh, The Heroic Ones stands as an epic martial arts film of effective heart. An all-star cast led by the charming David Chiang, the intense Ti Lung, and Ku Feng in one of his best performances makes this film reach a plethora of different emotions and tensions throughout, although when the film starts off it’s a lot to swallow in terms of getting the audience into the world of the characters. Even with a brief written and spoken statement about the state of affairs of the film, one then has to dive into being introduced to a smorgasbord of different characters. For an unprepared audience it could be horrendously overwhelming. The focus is then whittled down to a handful of the generals (and their father), but even then it seems to be a little too much for this epic film to handle at times. Paired with a plot that focuses on the chess-like approach of two opposite sides with intrigue, loyalties, and betrayals, The Heroic Ones has a lot going on and if you are not willing to leap right in then it’s going to be a sprint to even keep up.


Even with this going against the film, the pure charismatic screen presence of our main protagonists sells the film quite well. David Chiang, sporting some seriously 70s white fur boots, leads the film with his patented smirk and forceful demeanor, but it’s a movie-stealing performance from Ti Lung that gives the film its most impactful and emotional sequence. While Ti Lung’s character doesn’t get the best character back story (or any at all), a massive battle scene at the end of the second act where he must protect his father makes up for it. At this point, the body count has to reach well over one hundred (I would like to see someone do a kill counter on this movie…get to it, Internet!) and set against the epic visuals of a castle on fire in the background, Chang Cheh goes for broke here on both action and emotional terms, and the pay off is impressive.

Without giving too many spoilers away though, even this massive battle sequence cannot compare to one of the most shocking deaths (in concept and visually) that I have ever seen in a martial arts film that occurs in the third act. I had to scrape my chin off the floor at this point as it seemingly comes out of nowhere to sucker punch the audience. That’s all that I will say about that.
Sure, The Heroic Ones tends to have a rather off formulaic structure in the second half and there are a lot of roles that don’t nearly get enough character work to be as meaningful as they could have been, but the mix of effective action set pieces, the charismatic work of our leads, and the emotional gut punches that The Heroic Ones delivers still make it one of Chang Cheh’s best films. The film attempts to go full on epic with its story and it occasionally hinders the overall narrative, but the rest is impeccably crafted. A must see for fans of martial arts films.