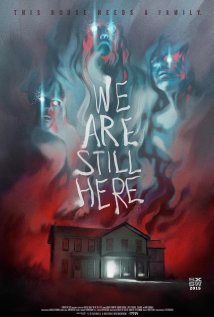 With a resounding ‘whoo whoo,’ it felt like everyone and their mother was jumping on board the hype train when it came to We Are Still Here. Positive review after positive review came pouring in, there seemed be instant megafans for the film, and even the media seemed to jump on-board. Granted, the trailer was solid and the poster artwork definitely had me sold initially, but this kind of almost unrelenting buzz does make one a bit cautious. One doesn’t want to get their hopes too high, just in case. Luckily, We Are Still Here decently lives up to its hype even if it’s far from a perfect horror film. In the end, this throwback creeper does some admirable things and horror fans are going to enjoy what it has to offer whether it’s the atmosphere or splatter filled third act.

For Anne (Crampton) and Paul (Sensenig), their new house in the country was just what they needed to remove themselves from the city after their son tragically dies. When Anne begins to suspect that an their son Bobby is still there with them and trying to communicate, they invite their two ‘spiritually connected’ friends (Marie, Fessenden) over to see if it’s real or not. When things start to go even stranger, they realize that there might be something more sinister going on in their house.

Horror is seeing a resurgence of ‘old school’ appeal in many modern films. Whether it’s a full on throwback like House of the Devil or a slick blend of older influence in a modern film like It Follows, there is a move by horror in the last handful of years to bring back the old and make it new. For most horror fans, this is relatively old news. For those going into We Are Still Here, it’s key to understanding the slow burn approach and style of the film. It’s this 70s style horror throw back in the first two-thirds that really succeeds in the film. With a subtle script and some nuanced performances, We Are Still Here takes some time to build its premise and atmosphere. Director Ted Geoghegan loves the static shots and long takes to get the audience looking at the scene and with old school jump scares of things in the back ground, shadows, and noises he does a fantastic job at really building the film up.

For the third act though (and I’m going to attempt at no spoiling anything here), We Are Still Here moves decades from a 70s style haunting flick and an 80s style supernatural killer film. Think of the shift as it went from The Changeling into a gory spin on The Fog in tone. There is a rather impressive body count and a lot of decent gore to be had at this point and for those looking for more than the atmospheric dread of the first two-thirds will be happy to know that it pays off in horror dividends in the final act. Personally, I was shocked at the almost sudden transition of tone, but it works to give the film an intense last act it deserved.

If there is anything that We Are Still Here struggles with it’s the nature of its script. Director Geoghegan serves as a writer on the film and while he attempts to go for subtle with the character and plot development, it’s occasionally too subtle. Awkward interactions with locals at the nearest town indicate something larger and more sinister is afoot in the house’s haunting, but it’s not until the end credits with the various newspaper headlines that we start to see a ‘history’ of the plot on hand. Throughout the film there just needed to be a little more meat to what was being offered in the mystery and it would have built some of the character dynamics a bit more. Despite some strong performances, it feels as though our two leads are given too little to create the kind of emotional reverb that could have happened and it’s not until their friends show up in the second act that we start to see a bit more of a character chemistry on screen. While the execution of We Are Still Here is still good, there is a foundation for something even better with a bit more depth to plot and character interactions.

We Are Still Here still remains one of the better horror films of the year. Geoghegan is a director to watch with his blend of atmospheric fear and the surprisingly gory results of this haunted house flick in the final act. The film is not perfect as it could have used a bit more to grab onto throughout, but it most certainly lived up to the positive hype it was building. Horror fans are going to want to check into this haunted house film for a night.