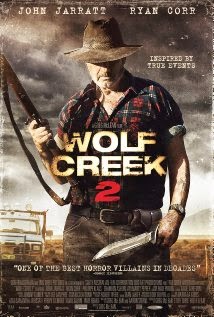 After watching the long awaited sequel Wolf Creek 2, I realized just how fucking long it has been since the first one came out. Granted I never really got around to watching the wildly acclaimed slasher flick until 2010 (you can check out my review HERE) so there’s that, but dammit this film was a long time coming. Just like any good sequel, Wolf Creek 2 delivers on a variety of fronts – giving us similar beats to what made the first film such a success and piling on all kinds of new additions to keep it fresh.

A German backpacking couple has decided that their ‘great adventure’ is going to have to be across the Outback. They plan to experience each other and experience an adventure of hitchhiking across Australia. What they didn’t plan on was running into the path of ‘Outback legend’ Mick Taylor. Now they’re gonna have to get the hell out of dodge before he makes sure they never leave.

At its core, Wolf Creek 2 is a fairly simple film that does some crazy not-so-simple things. The first one crafted a script and atmosphere to the film that made it hard to stomach at times in the realism of its approach as it took on the slasher genre in a Texas Chainsaw Massacre sort of way. Wolf Creek 2 does like most sequels do: jacks it up to 11. Now some of the lacking atmosphere in the horror moments might disappoint fans of the first film, in many ways it’s hard for me to say that it was a better film at all, but there is a sort of charm and outrageousness to those moments that comes as refreshing and I had a blast with it.

Greg McLean seems to have a lot more fun here with this entry. While there are some throwback elements to the first film, a vicious game of 20 Questions gets bloody in the final act with a bit of torture that will have you grating your teeth, the majority of the film is spent almost like an action thriller instead of a horror flick. What starts off like your basic horror film takes a wicked twist half way through (Oh, I’m not telling you what it is either!) and it leaps into a ridiculously awesome Road Warrior-esque chase sequence complete with stand offs, road kill, and semi truck leaving the ground. It might not have been your usual horror fare, but I was impressed with it. This sort of cat and mouse chase occurs throughout much of the second act and for this fan it was the highlight of the flick.


On top of the more action oriented style of flick at times, McLean also bathes the film in some serious dark humor. Since we all know Mick Taylor is already the bad guy, he instead uses the charm and quirkiness of the character for a slew of one liners and an increased insane malice. The opening sequence features our resident villain being pulled over by the police and while it didn’t add a whole lot to the plot of the film, it might have been my favorite scene from the film. Mick Taylor (played once again to perfection by John Jarratt) easily steals the film again and again with every scene he is in.

If there were two things that I could constructively criticize Wolf Creek 2 for it would be the lacking strength of a protagonist and the ending. Neither one really knocked the film over for me outright, but the lacking punch of a great hero in the film (despite Taylor actually calling the one protagonist hero throughout) and the sudden abrupt ending took it down a few notches. The first film also had an ending that came out of the blue and this one doubles down on it. So just be prepared for that.

Wolf Creek 2 might not be the underground hit that the first one was with it’s legitimate scares and palpable tension, but I’d be hard pressed to say that I didn’t enjoy this second one more. It’s a blast to watch with its action oriented chase sequences and insanely creepy/hilarious humor and even though I wasn’t sold on any of our protagonists overall, it’s not like they could have outshined Jarratt as Taylor anyway. For the third one, here’s to hoping they up the ante with a hero that can truly give the Outback Legend a run for his money.