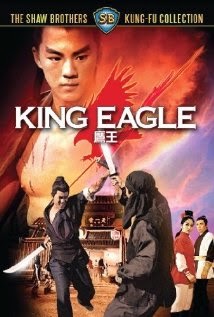 As a big Chang Cheh fan, I’m always excited to watch one of his films. Add to the mix Ti Lung as our leading hero and it’s already a recipe for greatness in my eyes. For his 1971 wuxia film King Eagle though, Cheh and company put together a great and effective flick that’s both action packed and surprisingly dramatic. Personally, I am used to Cheh’s almost gimmicky style (and there is some of that in here), but King Eagle carries some substantial character arcs and a really effective romantic subplot which comes as a big pleasant surprise in the end. It’s a flick that old school kung fu fans will have to see.

After the headmaster of the Tien Yi Tong group is viciously assassinated, the rest of the eight chiefs need to convene to promote the next in the line who just so happens to be the man (Cheung Pooi-Saan) who assassinated his boss. When a wandering swordsman known as King Eagle (Ti Lung) stumbles upon some information about this assassination, he finds himself fleeing from the vicious bandits…and right into the arms of the beautiful Yuk Lin (Li Ching).

King Eagle is one of those films where a good portion of the film is carried by the strength of its leads as actors. Ti Lung showcases a massive variety of skills in this film as our titular character including some great subtle acting. Partnered with a really impressive performance from Li Ching (who pulls double duty as the romantic lead and her own evil and vain twin sister) and King Eagle has a lot of heart in the mix. Wuxia films all sort of have that romantic subplot, but thanks to the great performances from our leads it works impressively here.
Earlier this week, I actually got into a discussion about the value of acting in old kung fu movies where I had to defend many of the actors in these kinds of films. I think

This is just one portion of the main plot though which for a wuxia film feels relatively subdued. It’s more or less a character driven epic that keeps a efficient pace between the dramatic character beats and the vicious fight sequences. Too many wuxia films tend to add a slew of characters that can’t possibly be supported in an hour and a half, but King Eagle has it perfectly balanced. Even for a film with four villains, each with their own motivation for the upheaval of ranks, never did I feel any of them got screwed when it came to fitting into the plot. It’s an impressive feat for Cheh and company to pull off.

Don’t fear Chang Cheh fans, his signature intensity is still present. The plot allows for some great moments of some crazy violence to be had and our ass kicking King Eagle seems quite competent for the job. Just in the first ten minutes or so we get into some serious body count numbers through the assassination and following chase, but it’s some iconic scenes that really utilize the action well. At one point, King Eagle is stuck holding a massive cart from running over a small girl which leads to some brutal crushing and a fight on top of the rolling wagon and the finale features a villain with clawed fingers who tears out the throats of his victims. This is just the top of the iceberg too. King Eagle pins a man to a tree with his sword, burns someone alive, and even drags a man to death behind his horse. Seriously I didn’t expect some of the deaths to be so brutal, but it’s completely fitting for the film.

All in all, King Eagle took me by utter surprise. It’s remarkably subdued for a wuxia, focused on great character interactions with some true acting talent behind them, and exploding with some classic Chang Cheh violence. While I expected a fun little kung fu flick with one of my favorite actors in it, what I got was an epic film that might end up being one of my favorite Shaw Brothers films. It definitely comes highly recommended

Written By Matt Reifschneider
Posted by DarkReif at 9:12 PM