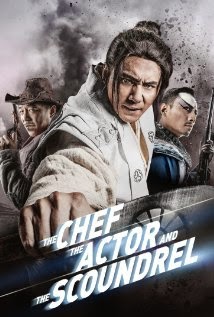 Comedies have never been my favorites overall, but I’m always willing to leap into one if the concept appeals to me. For a film like The Chef, the Actor, and the Scoundrel I was more than willing to take the dive. The idea of three semi-insane characters attempting to steal a secret formula from Japanese military folks in occupied China seemed like it could be full fun moments and comedic gold. The resulting film is more mixed than that considering it’s probably only half comedy overall and the blending of styles by director Guan Hu doesn’t necessarily work as well as it could have.

It’s the 1940s and the tension between Japan and China is at its peak. A vicious outbreak of cholera has swept through and left its mark, but hope is on the horizon. Two Japanese officials have just found themselves kidnapped at the hands of three insane restaurant workers…and they have decided that extracting information about a cure for cholera will be there shot at money and glory.

While I love quirky films as a general rule of thumb, occasionally quirky for the sake of quirky can run itself into the ground. That’s what happens here in The Chef, the Actor, and the Scoundrel and it’s strange take on blending war film, western, and comedy. While initially I loved the four lead characters and their crazy personas (yes, there is a leading lady in the film that the title mysterious leaves out), after about 10 minutes of the slapstick comedy and the circus like acts I was already burned out on it. This is already after the film has injected animation and silent film visuals into the mix, oh yes the first act of this film is everywhere, and it is borderline overwhelming on first viewing.

Granted, the film does have a purpose for this sort of cartoon like approach for the plot. I don’t want to give too much away, but the film takes a more realistic approach in the final half with serious and heavy character progressions as the film shifts into a more traditional war film scenario. While this shift certainly came with a sigh of relief from my overloaded brain, the film doesn’t abandon the opening style and sort of leaps from slapstick to serious in archaic fashion. Sure some of the comedy works (there is a decapitation sequence that had tears in my eyes) and some of the darker war material hits home (the final explosive finale actually has some great character beats), but the flow of the film suffers from the blended styles of the film.

All in all, The Chef, the Actor, and the Scoundrel is a film that will find its cult audience over time. It takes a few viewings to really latch onto the entire thing and too often that’s problematic for more casual fans of the style or idea who happen to rent the film or watch it on a whim. For this reviewer, the lacking flow of the script that fails to flesh out some of the subplots enough and the scattershot moments of humor didn’t quite make the cut. Perhaps with further viewings I will find my appreciation for the quirkiness grow, but at this time I’m only willing to shed: