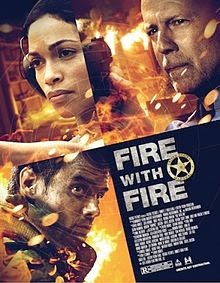 Randomly picking up straight to home video flicks can be a terrible idea at times, but for those looking for the underground cult gems it’s a chance that you have to take. Occasionally, one does find a film that is worthy of the time and/or money spent. Take Fire With Fire as an example. Sure, the film seemed to scream ‘terrible straight to home video action thriller,’ but it actually plays out with some relative effectiveness despite being rather mediocre in the writing. It’s not a great film, but I’ve certainly spent worse time on films.

Jeremy (Duhamel) is living a nice life as a well respected firefighter in Long Beach. When he witnesses a brutal killing from the vicious crime boss Hagan (D’Onofrio) though, he’s throw into the witness protection program by a local detective (Willis) under the supervision of Talia (Dawson). When shit hits the fan though and Hagan discovers where Jeremy is at, Jeremy is going to have to take matters into his own hands…and fight fire with fire!

Fire With Fire was perhaps most surprising in its super high production values. Outside of a few shoddy CGI fire elements in the opening and ending, Fire With Fire has some solid special effects and some pretty high profile casting choices. While 50 Cent, Rampage Jackson, and Vinnie Jones only have cameos in the end (seriously they threw 50 Cent on the cover and he’s in the film for less than five minutes), the combination of Dawson and Duhamel works here as our two lead protagonists. They share some solid chemistry and for a straight to home video I actually cared about what would happen to them. Yet, it’s Vincent D’Onofrio’s turn as the neo-nazi villain of the film that made Fire With Fire so awesome. With his hissing and giant nazi chest tattoos I was utterly sold on his performance.


From there though Fire With Fire tends to fall more into mediocre territory. The plot has to rush a lot of elements into the mix to get where it needs to be for our hero to start pulling his vengeance stint and too often it lacks some of the darker streaks it needed to sell the concept. I mean, this is a sincerely good guy who starts torturing people to save the lady he loves. I kind of wish they would have gotten a bit grittier towards the end, but Fire With Fire plays it pretty safe there. It also tends to be very predictable with how things turn out. I pretty much called the entire third act beat for beat about a half hour into the film.

While it’s not the kind of film that is going to really going to make a splash as an action film or a thriller, Fire With Fire is a decent flick that lives in a ‘no hard, no foul’ sort of world. It’s predictable in its writing and progression even if the execution is much better than expected, so go into it with those expectations and you will find some solid entertainment.