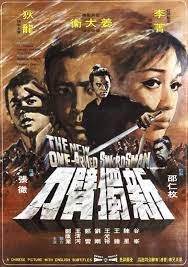 With two successful One-Armed Swordsman entries under his belt already, it would seem only smart to keep the ‘franchise’ going even if the Shaw Brothers were not always franchise oriented. So here comes Chang Cheh to revitalize the idea with the third entry, which in this day and age would have been called a reboot, with The New One-Armed Swordsman. This time around he calls upon his own ‘deadly duo’ to lead the film with David Chiang taking the titular role and Ti Lung in a meaty secondary role. Oddly enough, despite being a whole new story using some of the same concepts from the first two, The New One-Armed Swordsman is just as good as the original with strong characters, great dramatic moments, and a memorable finale. This series just keeps kicking ass.

Li Lei (David Chiang) displays his arrogance and skills in grandiose ways by using his twin sword technique to battle off robbers and general evildoers. When an evil villain, whom loves to stomp on upcoming martial arts heroes, beats him in a match, Li Lei is forced to cut off his own arm in disgrace and goes to live the rest of his days as a waiter in a small restaurant. There he meets another young hero (Ti Lung) who seems to be walking into the villains’ trap. Will he take up the blade once more to stop the evil lord once and for all?

Unlike Return of the One-Armed Swordsman, The New One-Armed Swordsman ditches a lot of the gimmicks and goes back to what made the original film such a great film to watch: dramatic character work. David Chiang handles the occasionally subtle and torn psyche of our lead with impressive care so that his journey from cocky swordsman to beaten waiter is something the audience feels and by the time he is forced to take up the sword again, we desperately want to see him kick some villain ass. This is countered by the ever-charming Ti Lung as his friend in the latter portion of the film who paints the character with broad strokes that still get the viewer invested in his role and how it will affect Li Lei. Partnered with a great secondary cast of a love interest (which never feels forced and works to add to the stakes of the third act) and some delightfully cheesy villains, The New One-Armed Swordsman blends all of the great elements of Shaw Brothers into an effective film experience.


From there Chang Cheh continues to create depth for the film with its simple, but well written and paced plot. Sure the ‘fallen hero must take revenge on those who continue to bully’ isn’t the most original concept and the Shaw Brothers certainly wore it thin, but it works here.  Chang Cheh is a great director who can blend serious concepts with occasional gimmicks (including the juggling aspect of this film and how that evolves to be a large portion of the film) and slathers it in some great action set pieces. While the film is full of fun bits of choreography with those brutal moments of violence that Chang Cheh is known for – you get to see a man chopped in half in mid air! – the finale is something to be admired. A massive bridge becomes a graveyard as our hero goes to face his nemesis and the combination of weapon work and some hand to hand combat flows damn near perfectly for the last act.

The Shaw Brothers studio might have pumped out a staggering amount of films at the height of their career, but the most impressive aspect is that there are films of this quality in the mix. The New One-Armed Swordsman is a sweeping and subtle character driven epic, fueled by great performances, thoughtful action set pieces, and a plot that drives home the humanity of old school kung fu flick. Like the original in this series, it comes very highly recommended as one of the best that the studio has to offer.