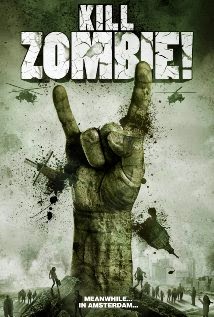 While I might watch a ton of foreign films, rarely do I find Dutch films on my viewing queue. A few here and there, but not a whole lot considering the amount of film I watch. So when Kill Zombie! came in from the ever vigilant Well Go USA, I was a bit shocked to be watching a zom-com (Is that term for zombie comedy still popular?) from the Netherlands. While the film certainly owes its fair share to some of the modern comedic groundwork to the likes of Shaun of the Dead, it tries to really burn its own trail for the audience with some pretty fun gags and full-blown splatter. It’s not a wholly original experience, but it’s pretty obvious that everyone involved with Kill Zombie! was having a blast making it.

Two brothers (Gaier and Radi) are having a rough day. One of them gets fired from his job due to a blooming relationship with his coworker and they both end up in jail for the night with two petty criminals (Hasselbaink and Arnhem.) When they wake up, they find out that shit has hit the fan and a Russian space satellite has crashed in the city and spread an infection that leaves a majority of the city as green spewing, flesh hungry zombies. Can these four gentlemen with the help of a beautiful police woman (Ravelli) rescue a damsel in distress and make it out of the city alive?

While the comedic aspects of surviving a zombie apocalypse are rather well documented on film at this time, I still had a lot of fun with Kill Zombie!. This Dutch zom-com isn’t necessarily original even as a silly comedy when the film is filled with simplistic one-tone characters and a ton of gimmick riddled sequences, but there is definitely a charm to the entire flick that carries it through the various generic tropes. The entire cast and directors Martijn Smits and Erwin Van Den Eshof have a knack for strong comedic timing and quirky modern streaks of humor. Take the TV news reporter who finds himself fighting zombies with a machine gun while trying to report the news or the two martial arts chefs who drive around a car with zombie parts chained to it. They are silly gimmicks for exposition and quick plot progression in the film, but it works due to a straight-faced performance and some great timing. This is how Kill Zombie! utilizes it’s comedy to effective results.

As a zombie flick, Kill Zombie! has some intriguing quirks too. The green blood and saliva is a nice comic touch to get away some pretty intense violence without being too dark (although a first person head bashing scene might be the best comedic moment of the film despite its rather super violent nature) and the gore abounds as our troop of heroes have to rely on anything to get through the apocalypse. A zombie grandma sequence is hilarious with its gore and timing. Just as an example.

While the film is not perfect and tends to hit some of the most predictable plot beats that these kind of films use, Kill Zombie! is still a charismatic flick that uses some fun timing and great outrageous set pieces to sell its basic concept. While it’s not for everyone, I had a blast with this film.