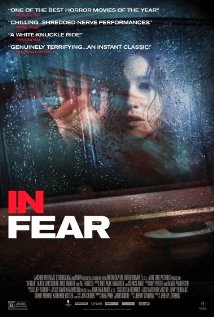 The reviews for In Fear might have been a bit mixed, but I was still looking forward to the indie horror flick. Made for a micro budget, In Fear looked to be a minimalist and atmosphere driven horror flick. Those are some of my favorite kinds. So I went into the film with high hopes and some decent expectations. What In Fear ending up being was, more or less, pretty boring. Sure there were some decent moments of actor chemistry and director Jeremy Lovering brings some great subtle moments of suspense, but too often it takes far too long getting anyway and the audience feels like our two protagonists…like we’re going in circles.

Tom (De Caestecker) and Lucy (Englert) might still be figuring out where they are going with their relationship together, but a weekend away at a concert with a night in a motel together sounds like the perfect time to do just that. The problem is that their motel is pretty remote in the woods and their quick road trip together starts to become frustrating when they get lost. Then weird things start to happen…

The potential for In Fear was pretty large. Paranoia, a decent into a nightmarish situation, character driven dialogue. These are all elements that could have been elevated even more throughout the film for it to be even more taunt and haunting. As is, In Fear tends to play the minimalism card a little too heavy in the opening (despite some great dialogue and actor chemistry with our two protagonists) and it the film seemingly drags as we are treated to some odd occurrences that don’t quite inject the fear that the title so desperately promises.


The latter half of the film takes an intriguing turn when our protagonists, who are already freaked out by the mysterious events occurring around them, meet another victim bloodied and stumbling in the forest. Without giving too much away plot wise, the film suddenly shifts focus to how he fits into the picture. While the actor playing our newly found victim struts some fun material, instead of propelling the film along to raise the stakes In Fear just sits on this and almost reboots the atmosphere and suspense factor. There is some subtle fun to be had with the interaction of the three parties involved, but rarely does it feel like its going anywhere with it and the film tries desperately to throw red herrings at the audience with it instead of pulling ‘the bomb under the table trick’ and allowing the audience to see what’s going to happen before the characters do.

By the end of In Fear, I ended up being very apathetic towards the entire film. It had some decent elements to enjoy including character chemistry and the atmosphere of the film, but it never felt like it was driving towards a purpose or conclusion. It meanders for most of the run time and while the final moments were a nice wrap around of events, it ended with a whimper. I can certainly see why many people loved the film, but I found it more or less a film that just existed.