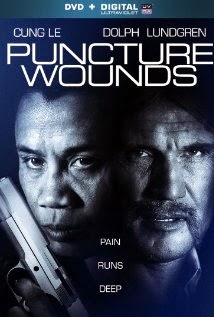 I have been anxiously awaiting for the film to really break out Cung Le as the action star he desperately wants to be, yet films like Puncture Wounds don’t do him justice. In fact, I’m not sure Puncture Wounds did anyone justice even if the title card was A Certain Justice rather than Puncture Wounds (?!). To be honest, this was a terrible fucking movie. I mean, I can see why they thought it might have made a decent low budget action flick. Too bad the execution of the film is some terrible new school attempts at gritty action that even I couldn’t get into.

John (Cung Le) is an ex-green beret finally come home from war. In an attempt to readjust to civilian life, he finds himself in a shit motel with little in the way of purpose. When he sees a prostitute being beaten in the parking lot one night, he takes it upon himself to show those guys what’s up and ends up killing a couple of them. When their boss Hillis (Lundgren) finds out, he tries to get John trapped and sets off a one man war against a massive drug and prostitution ring.

At the core of the film, Puncture Wounds really wants to be a modern First Blood. A solider who is dealing with his own internal issues comes head to head with crime tycoon? It’s a concept that could have – and should have – worked. It tries to work itself out too. The film touches on lots of potentially dramatic threads from PTSD to prostitution to child pornography to police corruption. Unfortunately, it’s a little much for the film to try and balance. We get a slew of characters with potential dramatic beats, like the main detective and his cancer stricken wife, that just don’t quite flow. Puncture Wounds needed to choose a few elements and strengthen them instead of spreading itself so thin on some many levels. It leaves the film feeling often scattered and lacking oomph for a lot of moments that could have had real impact.


It also doesn’t help that the writing for the dialogue can’t seem to figure out if it wants to be a cheesy action flick or a more serious thriller. For some pretty serious sequences, including an arc for Cung Le that starts off solid but flounders in the latter half when the film careens into resembling another entry into The Marine franchise, the actors seem intent on selling it, but the dialogue and content battles them. You end up having a decent action actor like Dolph Lundgren stroking his terrible looking mustache and spouting off generic lines about taking things to the next level. It doesn’t work.

…and then, to top it all off, directors Serafini and Coyne seemingly have no idea how to cut and shoot an action sequence. When the film opens with a later sequence of Cung Le throwing the beat down on a few thugs in an abandoned factory, I started to cringe at the modern zooms, rapid cuts, and attempted shaky cam. By the time he had his initial fight with the thugs to protect the prostitute, I gave up. That style might work for realistic thrillers and occasionally for bigger budget action films, it comes off desperate and poorly put together in a film like this. These new directors need to understand that grit and kinetic energy do not replace well choreographed action set pieces, but should be there to enhance them.

Unfortunately, Puncture Wounds is one of those low budget actioners that give direct to home video flicks a bad name. It’s scattered in writing, the acting suffers from a script and amateur directing, and the action pieces are butchered by poor choreography and editing. Here’s to hoping that Cung Le’s next starring role is in a film that’s pieced together better than this. For now, this is a big skip even for action fans.